Home » Car Reviews » Petrol prices: The cheapest places in the UK to get petrol and diesel

Petrol prices: The cheapest places in the UK to get petrol and diesel 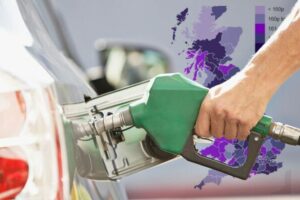 Despite the falling cost of oil, drivers across the UK are still battling with stubborn, near-record high fuel prices. Rishi Sunak announced a reduction in fuel duty by 5p in his Spring Statement last month to help households tackle the rising cost of living by lowering prices at the pumps. However, some retailers are taking more time to pass these savings across to UK drivers than others.

The rises in fuel prices over the last month have been largely driven by the ongoing war in Ukraine – which is pushing up the price of crude oil due to concerns over its availability, while most countries continue to boycott Russian resources.

Mr Sunak announced the fuel duty cuts to “help people now”, by enforcing the 5p cut with immediate effect in April, to last until March 2023.

RAC said: “Despite the Chancellor’s announcement, our data shows that savings made from cutting fuel duty have not been fully passed onto UK drivers.

“According to recent reports, large supermarkets and oil giants operating in the UK have passed on the cuts to customers, but smaller retailers or franchised stations are yet to make their move.”

Although, this can partly be explained by a number of reasons, including retailers purchasing fuel less frequently and more importantly, by the fact duty is levied on the wholesale cost of fuel.

RAC added: “This means higher wholesale costs can go some way towards cancelling out the fuel duty cut, meaning drivers don’t see much of a cost reduction at the pumps.”

The current average price of fuel in the UK currently sits at 162p for petrol, and 176p for diesel.

While we wait for further price reductions in fuel if and when they do, Express.co.uk has looked into the cheapest places in the UK to fill up your tanks with petrol and diesel.

Cheapest places to buy petrol and diesel in the UK

According to the average fuel price index updated weekly by Confused.com, the cheapest place to currently buy petrol in the UK is the Isle of Man at 145.5p.

East Central London is reported to be the next cheapest place on average to buy petrol, coming in at 155.4p.

Belfast ranks third at 156.4p for petrol, then Lincoln at 158p, followed by Watford, reaching 158.6p on average.
The cheapest areas to buy diesel include the same areas but in a slightly different order.

According to Confused.com, East Central London is the cheapest place in the UK to buy diesel, charging an average of 162.9p.

The Isle of Man ranks second, charging an average of 163.8p for diesel.

Luton, West London, Durham, Worcester, and Twickenham are reportedly the most expensive places to buy petrol, charging averages ranging from 164p to 166p.

Lerwick, Luton, Dumfries, Bromley, and Twickenham are reportedly the most expensive places to buy diesel in the UK, with average prices ranging from 179p to 184p.

However, there are certain retailers charging much less than these average prices dotted around the country.

“While supermarket fuel usually comes from the same refineries as the big brands like Shell or Esso, these brands will usually add a range of special additives to their own fuels in order to improve efficiency and performance – which is why they tend to cost more.”

A quick scour of petrolprices.com showed Costco to be charging the most competitive prices for fuel in the UK so far, with prices ranging from 149p for petrol and 166p for diesel across the country.

Why do fuel prices vary by region?

Prices can vary dramatically from region to region and even in towns that are only a few miles apart.

RAC explained the disparity: “Local retail dynamics also play a part. Local prices are very often driven by the presence of supermarkets keen to compete on price or an independent forecourt retailer that is determined to offer the cheapest fuel.

“If local supermarkets selling fuel don’t compete strongly on price, this can, in fact, lead to motorists paying more.”