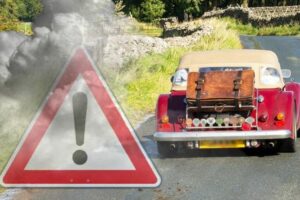 Malcolm Mckay, Spokesperson for the Historic and Classic Vehicle Association, said electrification “isn’t” the solution as he has demanded ministers to take another look. He has backed comments from EU President Ursula Von der Leyen which suggests a more lenient approach to vehicle upgrades.

She said production changes would be “up to the manufacturer” while hinting targets may be achieved through “new fuels”.

Ms Von der Leyen said: “We will still set out an end date after which all cars will have to be emissions-free.

“Otherwise there will be a lack of certainty and we won’t achieve our goal of climate neutrality by 2050.

“How they change their production is up to the manufacturers.

“They know best how to develop new cars or new fuels.”

Responding, Mr McKay backed the comments as he pushed for the Government to accept fuel changes could be a simple solution instead of electric cars.

He said: “This is absolutely the message we need the UK to adopt.

“We should not have government dictating that electric is the only answer – it isn’t.”

He added the ban on the sale of combustion engine cars was “a big concern” for the HCVA and car manufacturers.

Currently, sales of polluting petrol and diesel models will be banned from 2030 to push drivers to switch vehicles.

However, reports in March suggested many top manufacturers had lobbied the Government to not bring forward changes any sooner than 2040.

This was all but confirmed when Transport Secretary Grant Shapps said firms had told him 2035 would be a more “realistic” target.