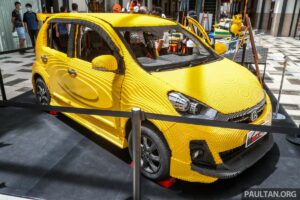 The Perodua Myvi is a Malaysian automotive icon, with over one million units produced since the first generation was introduced in May 2005. Humourously referred to as the “King of the Road,” the popular hatchback has now been immortalised in Lego form by Bryks Art, a collective of artists that meticulously piece together masterpieces to showcase the endless possibilities of brick art.

What you see here is a life-size (1:1 scale) scale of the Myvi, which pays homage to Malaysia’s most endearing hatchback. Called the MyBi, it is currently on display at Bryks Art’s King of the Road showcase at Publika Shopping Gallery.

The incredibly detailed Lego replica of a Myvi Extreme 1.5 took a team of 15 Malaysian builders approximately two months to build, using 1.27 million brick elements laid piece by piece. Both the vehicle’s interior and exterior are built entirely out of brick elements, with the only exceptions being the axles, wheels, tyres, speakers, mirrors and few light bulbs.

While the MyBi is undoubtedly the star of the show, the exhibition also features five smaller (1:4 scale) Lego sculptures that celebrate the “apa apa pun boleh” attitude of the Myvi, created by various teams of artists.

These include the MyBi Rocket for space travel, the MyBi ATV for off-roading, the MyBi Tractor for farming (spot the cow), the MyBi Tank for military use as well as the MyBi Robot that climbs stairs. According to Bryks Art, these creations were conceptualised, designed and built based on memes of the Myvi floating around the internet.

Besides the exhibits, visitors will also be able to get creative by engaging in mosaic art building activities throughout the day, and shop for Bryks Art merchandise. The event, which began yesterday and is currently ongoing until this Sunday (May 29, 2022), is open to the public from 10am to 10pm daily.