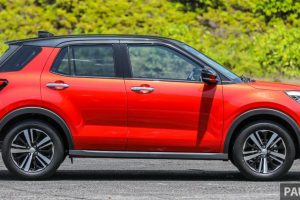 It appears that bookings for the Perodua Ativa has increased substantially this month. According to a circular to dealers by the carmaker dated April 21, bookings have reached 55,000 units and the waiting period for the most in-demand configuration is up to four months.

In an April 1 statement, Perodua president and CEO Datuk Zainal Abidin Ahmad said that Ativa bookings were at 14,574 units since order taking started on February 19. Perodua has been working hard to ramp up deliveries to fulfil demand for its new SUV. At the start of April, the carmaker had handed over 4,345 units of the Ativa in less than 30 days. The new model was officially launched on March 3.

That’s a very efficient start from the market leader. For context, the Proton X50 was launched in late October 2020, and by end March 2021 (five months), the company had delivered 11,654 units of the SUV. Of that total, 3,513 units were delivered in March. With a bulging order book and the global shortage in semiconductor chips that has affected almost all carmakers, it’s inevitable that the waiting list for the Ativa will grow. According to the circular, Perodua admits that ensuring production and fulfilling current high demand within normal delivery time is its biggest challenge now.

“For now, our biggest challenge is the semiconductor chip shortage, which is having varying impacts on carmakers on a global scale. We are working with our partners to find alternative supply while at the same time monitoring the situation on a daily basis to ensure continued operation of our production lines,” Zainal Abidin said earlier this month.

As such, as of April 21, the waiting period for the Ativa ranges from 1.5 months to four months, depending on variant and colour. The circular does not elaborate on the variants and colours that are highest in demand, but earlier this month the P2 chief said that Ativa demand is skewed 67% towards the range-topping AV, which is within Perodua’s projections. We understand that not only are buyers going for the costliest Ativa, they’re also ticking the pearl colour with black roof cost option, bringing the price to RM72,000 on-the-road excluding insurance, with sales tax exemption. It seems that many Ativa AV buyers have gone for the pearl white two-tone. Conversely, we haven’t seen many Cobalt Blue (new to P2) and Granite Grey examples on the road. The entry-level X variant is a rare sight.

The Ativa is a compact SUV underpinned by the new Daihatsu New Global Architecture (DNGA) platform. It is powered by a 1.0 litre three-cylinder turbocharged engine with 98 PS and 140 Nm of torque from 2,400 to 4,000 rpm. Power goes to the front wheels via a D-CVT (Dual-Mode CVT) with manual mode.

The platform, boosted motor and stepless gearbox are all new to Perodua; so are the ASA 3.0 driver assist pack (upgraded parameters, comes together with Lane Departure Warning and Prevention, standard across the board), Level 2 autonomous driving features and LED headlamps with Adaptive Driving Beam. The latter is a Matrix LED-type offering with sequential signals and side view lamps.

The Ativa is priced from RM61,500 to RM72k. To learn more about the SUV, check out our launch report and video review.