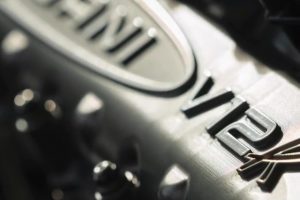 Pagani previously said that it would unveil the new Huayra R on November 12 last year, but that date has come and gone, with no car in sight. To ensure the hype train isn’t slowed down, the carmaker has released a teaser video for its upcoming hardcore model, which is the spiritual successor to the Zonda R of the past.

The teaser video is part of the company’s New Year’s greeting and gives us an earful of the Huayra R’s V12 engine. Previous reports suggest that unlike other Huayra derivatives, there will be no turbochargers involved, with the V12 set to go with pure natural aspiration instead.

Based on what we can hear, the Huayra R’s soundtrack does sound suspiciously turbo-free, although the audio quality isn’t exactly the best. Company founder Horacio Pagani has stated that the new model will feature a “new aspirated engine made especially for this purpose,” so expect something bespoke to be fitted under the hood.

It’s been rumoured that the V12 was developed with HWA to develop around 950 hp and rev past 9,500 rpm. Like the Zonda R before it, the Huayra R is expected to be a track-only vehicle and won’t need to conform to any safety, noise or emissions regulations.