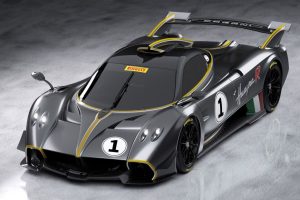 Many years ago, Pagani introduced the world to the Zonda R, a hypercar built with only one focus in mind: the racetrack. With total freedom and no conventional regulations to adhere to, it was the most extreme version of the company’s first-ever model, and only 15 units of the track-only special were ever created.

Fast forward to today, and the company has applied the same approach to its second model, resulting in this, the Huayra R. Like its spiritual predecessor, the new model is 100% not road legal and will be built in limited numbers, with each of the 30 units planned carrying a base price of 2.6 million euros (around RM12.8 million).

That’s a lot of money for what the company describes as a “laboratory car,” but you do get a car that is powered by the most powerful, naturally-aspirated internal combustion engine in the company’s history. Developed in partnership with Mercedes-Benz’s HWA racing subsidiary and AMG collaborator, the 6.0 litre V12 replaces the standard Huayra’s twin-turbo unit of the same capacity. Aside from providing the grunt, the engine doubles as a structural element capable of supporting the transmission system and subframes. Speaking of the transmission, the Huayra R sports a six-speed sequential, non-synchronized dog ring gearbox that drives the rear wheels. Weighing in at just 80 kg, it is driven by three-sintered metal disc racing clutch for a friction efficiency of 95%.

The setup also includes a new exhaust system made from lightweight Inconel alloy, with identical length exhaust pipes for all twelve cylinders to make sure the Huayra R roars like a F1 car of the past. If you have to take the car to a track with noise restrictions, the company can equip mufflers to ensure noise emissions are reduced to within the FIA limit of 110 decibels, so it should be quite a riot without them.

The entire powertrain is shoehorned into a chassis that has been built with materials that have highly scientific-sounding names, including Carbo-Titanium HP62-G2 and Carbo-Triax HP62 for the revamped monocoque that incorporates the seats fully.

Together with subframes made of chrome-molybdenum alloy steel, the entire structure ensures maximum protection with specific shock-absorption side structures and the roll-bar, while maintaining easy access to the cockpit. Compared to the road-going Huayra, the track-only version sees a 51% increase in flexural rigidity and 16% gain in torsional rigidity. With everything put together, including the bare carbon-fibre bodywork, the car has a dry weight of just 1,050 kg.

Aerodynamics is another important aspect of the Huayra R, with the company initially aiming for 1,000 kg downforce at 320 km/h, which was easily met. In testing, the car also hit the company’s target of a 46:54 front-to-rear downforce distribution throughout the entire speed envelope, while maintaining optimum ground clearance for maximum aerodynamic performance.

Key highlights include two new side air intakes at the front to channel air down the sides of the car to minimise turbulence and to keep the brakes cool, while wing profiles on the bonnet also improve air extraction speed and create better stability.

Elsewhere, vents above the wheel arches relieve built-up pressure and help to direct air to the corner winglets that are part of a much larger and adjustable item. To ensure the V12 is fed with air, there’s a prominent roof scoop with an integrated dorsal fin, while a flat bottom and large rear diffuser complete the aerodynamic package.

Revised kinematics and geometry of the suspension unit are necessary to comply with the power and downforce generated, with the setup comprising of forged aluminium alloy, independent double wishbones, helical springs and electronically controlled active dampers.

Pagani’s partnership with Brembo also sees the Huayra R being equipped with a set of CCM-R carbon-ceramic discs measuring 410 mm at the front and 390 mm at the rear – both are coupled to six-piston calipers and racing brake pads.

The Brembo kit sits being a set of 19-inch forged aluminium alloy wheels from APP, which are wrapped with Pirelli P Zero racing slicks that are available in dry or wet configurations with 275/675 front and 325/705 profiles.

While we don’t get any interior shots, Pagani describes the cabin as pretty much like a race car, with a heavy-duty safety cage integrated into the central monocoque, an extinguishing system, six-point safety belts covered in Nomex flame retardant material, as well as seats with Ener-Core EC 50, FIA-approved foam padding and carbon-fibre headrests.

Controls for the car’s traction control, ABS mapping, radio communication and other functions are easily accessed on the quick-release steering wheel with paddle shifters. Secondary controls such as lights, engine and suspension maps, and brake balance are placed on the centre console instead.

No fancy dials either, with a motorsport dashboard display providing the driver with all the vital information he or she needs, with onboard telemetry to log driving data for later analysis. A set of adjustable AP Racing pedals ensure the driver’s ergonomics are perfectly matched, together with the telescopic steering wheel adjustment.

To ensure Huayra R owners are kept busy with their new purchase, the company also throws in the “Arte In Pista” (“are on the track”) programme, offering a calendar packed with personalised events. From individual track days at renowned circuits to group events, these events are tailor-made for customers in North America, Europe, Asia and the Middle East, with the full support of a dedicated Pagani technical team.