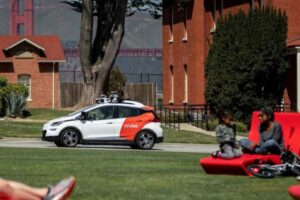 Cruise is one of the first companies to be granted the right to carry out driverless rides with passengers on board, in San Francisco, and as you can imagine, some glitches may still appear, like that one time the police stopped a driverless Cruise cab because it was driving at night with no headlights. Last Tuesday, though, these autonomous taxies actually caused a traffic jam – they clustered together and needed human intervention to move again.

Automotive News quotes Cruise spokesperson Drew Pusateri, who confirmed the company had encountered a technical issue, but didn’t go into detail. He did say that

We had an issue earlier this week that caused some of our vehicles to cluster together. While it was resolved and no passengers were impacted, we apologize to anyone who was inconvenienced.

We found the on Reddit by user seansinha that made this public, showing what looked like over ten self-driving vehicles stuck on Gough Street, and at first glance it looks like the driverless cars have gathered there to protest, demanding better working hours, and that they had barricaded the road on purpose. Joking aside, it does really look like they had blocked the entire width of the road as they had pretty much taken up all the lanes.

The source article also points to another incident when a Cruise vehicle stopped traffic, although this time it actually was an issue because it blocked the path of a firetruck that was trying to reach an emergency. Several smaller incidents were also reported with Cruise cab, but no injuries or property damage that we know of have been reported so far.

General Motors-owned Cruise operates its driverless ride hailing service in less than a third of the city, with a relatively small fleet (for now) of 30 vehicles. The service is technically available to all, but only certain people (usually with connections to the company) actually get invited to be a passenger on a driverless ride. In fact, even though it’s been allowed to take paying passengers for a few months, Cruise only had its first fare less than a week ago, until then catering to company employees, city officials and journalists.