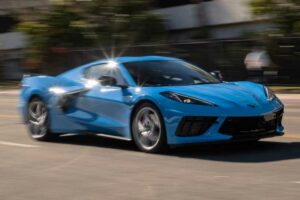 With its engine moved behind the passenger compartment instead of in front, the 2021 Chevrolet Corvette gains extra storage space where the engine used to be. We find the front trunk, or “frunk” as it’s often called, is very useful—at least it was until it stopped opening.

There were no warning signs. Out of the blue, the electronic release mechanism just stopped releasing. Whether you pushed the button on the key fob, inside the cabin, or under the headlight, the turn signals would blink in acknowledgment but the hood wouldn’t budge. Thankfully, none of our stuff was locked inside.

We should note, this isn’t the first issue Chevrolet has had with the C8 Corvette’s front trunk lid, nor is it a repeat of those past issues. First, the company had an issue with front trunk lids not latching correctly and coming open while driving. Later, it was found the emergency release button inside the front trunk (in case a small person gets trapped inside) might stop working 10 minutes after the car was turned off. Both were corrected by a software recall issued months before our car was built. Ours just plain didn’t want to open no matter what button you pushed or whether you were moving or parked.

Luckily for us, it happened right around the time the car started asking for its first service appointment. With 8,817 miles on the Corvette’s clock, we dropped it off at the local dealer, where we were informed it also had two outstanding recalls in need of correction. The first was a software update to correct an issue with the infotainment screen failing to come on in cold temperatures, an issue we’d only noticed once or twice because Los Angeles never gets that cold. Easy fix, covered under warranty.

Neither the front trunk lid nor the other recall, for the fluid reservoir cap on the front lift system, could be fixed that day, unfortunately. The cap was on backorder (apparently, it leaks sometimes, though we never had this issue), and the latch actuator in the front trunk needed to be replaced. That, too, had to be ordered.

On the plus side, we did get the first oil change and general service out of the way. Eight quarts of synthetic oil, a new filter, and a billable hour of the tech’s time set us back $183.04. The dealer called us back 12 days later when the parts arrived and fixed both the front trunk and the reservoir cap under warranty.

Separate from the service, we wore through our first set of tires with 11,589 miles on the clock. With staggered wheel sizes front and rear, the tires aren’t all the same price, with the fronts going for $406.99 each and the rears $537.99 apiece. Altogether, a fresh set us back $1,889.96, plus $100 for mounting and balancing by ZipTire.

Less than 12,000 miles is a very short life for a modern tire, but there are extenuating circumstances. Some of those miles were on a racetrack, which wore them down more quickly. Before it hit the track, we also put the car in its optional track alignment, which specifies a lot of negative camber, among other things. Greatly preferring how the car drives in track alignment, we elected to leave it that way knowing it would wear the tires out faster.

Sure enough, we noticed cords showing on the inner shoulders of the rear tires at 11,589 miles even though there was plenty of tread left on the rest of the tires. Let that be a lesson to you: Check the entire tire for wear, not just the tread in the middle.