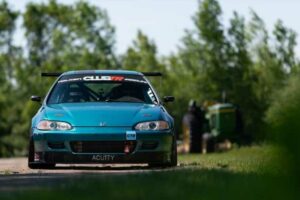 The fun, excitement, and competitive juices that flow during track days in a well-built car like this 1995 Honda Civic hatchback are entirely addictive. This, if you don’t know firsthand, has at least been made clear by fellow enthusiasts time and time again. What often isn’t covered are the dangers involved in thrashing through corners with a gaggle of other cars whose drivers you have absolutely no control over. Things—i.e., a few bumps or worse—happen from time to time, and for Evan Weider, just a few years ago, one of those “things” resulted in the loss of his track-focused two-door Civic chassis.

While Weider was clicking off laps during one of Gridlife’s Track Battle events, a Camaro lost its brakes and eventually found its stopping point—his silver hatchback.

“I was involved in a massive car-on-car, on-track collision, T-boned on the passenger side, [and] it ultimately led to the car being a complete write off. Going home with a broken heart, I honestly did not know what to do,” Evan recalls.

The totaled Civic chassis wasn’t making a comeback, but fortunately, the drivetrain remained useable. Yet Evan wasn’t in any position to purchase a new chassis and all the parts involved in getting it competition ready, and that is where some good friends come into the picture. “With the kind heart of some of my close friends, they decided to create a GoFundMe to get me back out on track. After several days, I ended up receiving countless donations, more than enough to get me back out there, comfortably,” Evan explains.

You’ve seen dozens (probably more) of GoFundMe requests splash across your feed asking for money for various causes. Some are entirely legitimate, while others sound more like a cash grab for unsavory types. In this instance, fellow enthusiasts pitched in to help Evan get back to where he needed to be, and those funds were solely used for what he refers to as “EG 2.0,” as in, the second coming of his beloved EG-generation Civic hatch.

With generous financial backing now at play, Evan put the word out that he was searching for a suitable replacement fifth-generation Civic chassis to get started on. A Facebook friend reached out and mentioned that he had Paradise Blue Green Pearl (basically, peak ’90s teal!) hatchback collecting dust and since that just so happened to be Evan’s favorite factory Honda color, it seemed all too fitting.

“The vision of EG 2.0 was to replicate what I developed with EG 1.0, but only to make it better and the goal was to get this car up and running for the 2020 Gridlife Midwest Festival.”

More on the ever-growing Gridlife Series:

Knowing your way around a specific chassis certainly helps with the build process, but so does dedicating every possible free moment to wrenching and making progress, something Evan did from July through September in a race against the clock to make it to the festival.

“Besides the cage, all of the work was done by me. All of the painting, wrenching, fitting, cutting, and modifying was all done with my own two hands.” The relentless pursuit ended with Evan shaking the car down at the intended Gridlife event, and officially claiming a successful comeback with his EG 2.0 project.

What’s in the Box?

You can argue for days on end about which Honda engine suits the Civic EG best, whether it be D, B, H, J, or K, but the truth is, they all do. A spacious environment with shoulders that have no issues supporting just about any Honda powerplant, the fifth-gen Civic bay is as modular as they come and there’s really no wrong answer.

For Evan’s needs, the stock block K24A2 fit the bill perfectly. Useable torque, a penchant for abuse resistance, and an equal amount of easy-to-source OEM replacement and aftermarket parts, it’s the ideal track mate and falls within the ClubTR class displacement guidelines.

To get the most out of his K-swap, a 50-degree VTC gear was added, and A1 Technologies head studs used to keep the top and bottom halves together for the long haul. Skunk2’s Ultra Street intake manifold with 74-mm throttle body is fed by a LoveFab 4.0-inch intake, while spent gasses see their way out through a megaphone-style header and 3.0-inch exhaust. Fueling is a mix of OEM and aftermarket with capable RDX injectors fed by a Deatschwerks fuel pump, filtered by FuelLab’s 10-micron debris catcher and backed by Acuity Instruments’ fuel rail and pressure gauge. Hondata’s always reliable KPro V4 is on duty and relays info to an AIM Strada logger with real-time visibility provided via an MXP digital dash.

The original Paradise Blue Green Pearl that Evan is so fond of is still intact, though slightly modified with matte and gloss black livery highlighted by the various brands that stand behind his efforts on track. Track Life fenders add enough space to comfortably squeeze 245/40 Falken RT660 on 15 x 9 Konig Dekagram wheels up front, with a 15 x 7.5 and 225/45 combo in the rear completing the front-axle-favoring tire stagger. The factory front bumper has been fitted with a homemade splitter and matches the 4.0-inch PCI side diffusers, while a large 66-inch Nine Lives Racing wing overshadows the rear.

So what’s next for the guy that got a second chance thanks to the help of his fellow enthusiasts? “I’m primarily focusing on continuous improvement with the cooling system and proper alignment specs. Once this car is situated properly, it will be a heavy hitter in Gridlife’s new ClubTR class.”