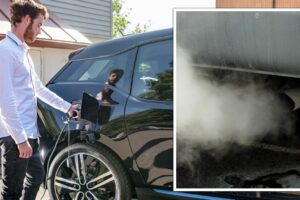 Sales of new petrol and diesel vehicles are set to be banned in the UK from 2030 and from 2035 in European Union nations. The move towards net zero emissions has divided opinions among experts and drivers, some of which say it is too far away, while others believe the necessary electric vehicle infrastructure is not widespread enough.

Karl Haeusgen, President of the Mechanical Engineering Industry Association (VDMA), said more should be done to promote alternative measures rather than moving forward solely with EVs in mind.

He added: “It is not the engine that is the problem, but the fossil fuels used to date.

“Instead of effectively banning the combustion engine by limiting all tailpipe emissions to zero, all climate-friendly drive options should be used.

“The internal combustion engine (ICE) powered by CO2-neutral, green e-fuels remains a necessary complement to the electrification of road transport.

“After all, it is not the engine that is the problem, but the fossil fuels used to date.

“It is true that new jobs will be created in the upstream processes of the supply chain, for example in the processing of materials for battery cells and in the charging infrastructure environment.

“But this is not happening at the same time and nowhere near the same amount.

“The new jobs are not interchangeable with those lost.”

The VDMA stated: “The EU Commission’s plans to allow only battery and fuel cell electric vehicles on the European market from 2035 are the wrong way to go in terms of climate and innovation policy.”

The Government is planning to ban the sale of new petrol and diesel cars from 2030, prioritising electric vehicles for the future.

A further ban is set to affect new hybrid vehicles from 2035, with the Government saying new cars and vans can be sold if they have significant zero emission capability between 2030 and 2035.

This would affect some plug-in and full hybrids, although the Government is expected to define “significant zero emission capability” later this year.

While the sale of new petrol and diesel vehicles will be banned from 2035, drivers will still be able to buy and sell second hand ICE vehicles.

The plan to reach net zero emissions by 2050 has been described as “ambitious” and is said to require an “equally ambitious plan”.

The report from the VDMA claimed that internal combustion engines are “ecologically and economically advantageous”.

It found that there would be a net loss of 160,000 jobs in the powertrain value chain alone for the scenario in which no more internal combustion engines are registered in Europe after 2040.

The VDMA is calling on Governments and policy makers not to rule out the use of synthetic e-fuels as a way to decarbonise transport.

Some car manufacturers like Porsche and Mazda have invested heavily in e-fuels in a bid to save the conventional car engine from 2030 restrictions.

The Government is currently consulting on how best to introduce a Zero Emission Vehicle (ZEV) mandate, which it hopes to introduce by 2024.

This mandate would see car makers pressured to sell an increasing share of electric models as part of the transition towards the ban on sales of traditional petrol and diesel motors in 2030.