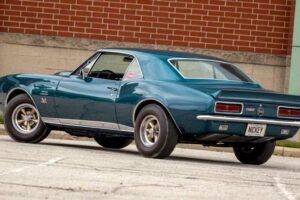 Even in the golden age of hot-rodding, the mid-’60s and early ’70s, sometimes what GM was churning out, although cool, wasn’t enough for the die-hard gearhead. They wanted more, and that pent-up demand gave rise to names like Yenko, Nickey, Berger, Motion, and others. Nickey Chevrolet in Chicago was one of the highest-volume dealers in the world, and in 1967 they became the first to install a 427ci big-block into a first-generation Camaro. This restored 1967 Camaro RS/SS Nickey supercar is a prime example of the high-performance offerings that were out there for Chevrolet fans.

At the time, Nickey offered three levels of performance for their specially prepared Camaros. Stage I was a few mild tuning and styling upgrades, including headers, steering wheel, vinyl stripes, an 8,000-rpm tach, and special wheels. Stage II added a snotty cam, heavy-duty clutch, and a Hurst shifter to the mix. For those who wanted it all, typically for competition use, there was the Stage III kit, which added solid lifters, a stronger rear differential, Racemaster tires, and a dual-quad manifold (although the dual-quad system was seldom installed)—a package that could take the Camaro deep into the 12s.

To back up the 427 there was usually an M21 Muncie four-speed, a 12-bolt posi rear, traction bars, and Super Scavenger headers. The menu at Nickey had all sorts of aftermarket add-ons to choose from, so no two cars built at Nickey were exactly the same.

This restored 1967 Camaro RS/SS Nickey supercar, going up for auction at Mecum’s 2022 Indy event from May 13-21, is one of the highest-optioned Nickey 427 Camaros built, and a prime example of the level of high performance available to the Chevrolet buyer at the time. It is believed to be one of only three built with the aluminum-headed RPO L89 427ci/435-hp OHV V-8 with three two-barrel Holley carburetors, and the only one produced in this color. The Stage III version of this engine is equipped with exhaust headers, a new camshaft, solid lifters, and a dual four-barrel manifold, though this was usually replaced with the three two-barrel setup used on this car. The engine has a heavy-duty clutch that attaches to a close-ratio RPO M21 Muncie four-speed transmission with a console-mounted Hurst Competition Plus shifter. Power is pushed out to a 12-bolt rear axle with a Positraction differential.

The ’67 is finished in Tahoe Turquoise, with a custom hood equipped with a Corvette-style stinger hood scoop and chrome-plated hold-down pins. White Super Sport stripes and badges plus 427 badges identify the serious attitude of this car. This Camaro also has the Rally Sport package, which adds a distinctive grille with retractable headlamps, and both wheel-opening and lower-body bright trim. Additionally, this Camaro has optional front and rear spoilers. The interior is trimmed in black vinyl with front bucket seats and black carpet.

This Camaro comes with a Nickey Camaro spec sheet, NICB dealer file inquiry, a framed Nickey certificate of authenticity, signed Nickey authentication, and Nickey poster boards. The car was showcased in David Newhardt’s books Chevy SS: 50 years of Super Sport, Camaro: Forty Years, and American Muscle Supercars. The car also includes a special license plate from the 2013 Concours d’Elegance of America at St. Johns, and a Chevy Vettefest Showcase certificate, and it was chosen as a cover car for the Year One Restoration Parts and Accessories catalog. For those seeking a car among the rarest of the rare and the best of the best, this just might be the ticket. To check out all the cool supporting documentation on Lot F123, or to become a bidder at the 2022 Mecum auction happening May 13-21 in Indy, visit the Mecum 1967 CHEVROLET NICKEY CAMARO RS/SS STAGE III listing.