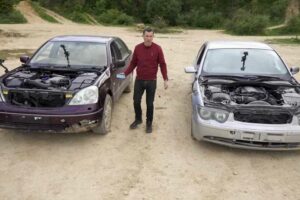 This video might be controversial and/or upsetting to some. For the record, both cars featured in the clip are said to not be road-worthy. Whether they were destined for the scrap heap is unknown, but after this brutal engine torture test, there’s little else to be done with them because both are essentially paperweights. At least they died in battle.

What we have here is a Japan-versus-Germany showdown for engine durability, conceived by the crew at Carwow. Representing Japan is a 2000 Lexus LS 430, packing a 4.3-liter V8 that once boasted 280 horsepower. Team Germany is carried by a 2001 BMW 735i, wielding a slightly smaller 3.6-liter V8 producing 270 hp. That is, it was rated at 270 hp when new – both cars have clearly lived rough lives so who knows how much power they have at the start of this video.

However, at the end of the video we can deduce with some authority that power output is approximately zero. Both engines are drained of oil, fired up, and kept running until each one expires. The million-dollar question is, which engine dies first? After a round of idling, mid-range revving, and full-throttle brutality against the rev limiter, the Lexus sputters and shuts down in 1 minute, 20 seconds.

Meanwhile, the big Bimmer keeps right on going. It’s subjected to the same abuse, but with the Lexus dead, the BMW embarks on some victory laps. For another 6 minutes, the 735 howls a V8 song while throwing dirt rooster tails and spinning donuts until it finally gives up the ghost. It ultimately ran without oil for 7 minutes 34 seconds, far surpassing the Lexus. It’s a victory for Germany.

Of course, there are many variables left unmentioned or unchecked in this exhibition of destruction. We aren’t told how many miles are on these cars, though we can at least see 163,965 showing for the Lexus. There’s also no mention of engine condition prior to the test, aside from both cars still running. We don’t know the maintenance history of the cars, the oil used, and there’s no attempt to restart the cars after they die. The BMW shut down with a notable pop, but the Lexus merely sputtered and clattered to a stop. It’s quite possible the old LS 430 isn’t really dead yet.

Could these engines have been salvaged prior to the test? Were they worth salvaging? We’ll never know, but the message is clear: If you value your car and encounter a loss of oil pressure while driving, pull over and shut the engine off as quickly as possible.