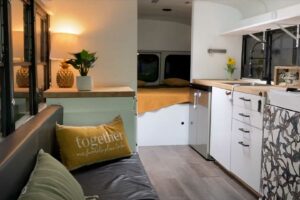 Buses have become a go-to vehicle for those longing to live on the road. They are larger than your typical camper van conversions and much larger than truck campers. However, they’re not motorhomes, which can command eye-watering amounts of cash to own.

Buses provide ample space for people and possessions, and they’re a blank slate for the owner’s wants and needs, like this 2000 Blue Bird that underwent a stunning makeover to convert it into a mobile home.

The 22-year-old bus has a roomy interior. A long couch sits to one side, and it folds out into an extra bed. Next to it is a counter with soft-close drawers for extra storage. Across from the couch is the kitchen area. It has a four-burner stovetop fueled with propane. Next to that are more drawers, a sink, a fridge and freezer combo, and extra counter space.

The kitchen abuts the rear bedroom, which occupies a good portion of the rear of the bus. Beneath it is extra storage. Also at the back is the bathroom. It’s narrow, squeezed in next to the bedroom, but it features a composting toilet and stand-in shower.

The exterior is finished in green, but it looks nondescript. The rear has a ladder to the roof, and there are five solar panels on top and a skylight. On the outside, there’s access to the solar panel batteries, two gray water tanks (one for the shower and the other for the sink), and a 45-gallon freshwater tank. There’s even a backup camera. The video does not go into much detail about the mechanicals, but it reveals that it comes with a Cummins diesel engine.

More people than ever are venturing out in motorhomes, camper vans, and truck campers. Companies that build and upfit such vehicles are backlogged with orders, but there are other options like a converted Blue Bird bus. The choices are endless with a. Bus conversion, and it might be easier to get than an already built one.