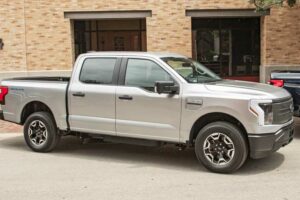 Nearly halfway into 2022, it should now be almost assumed that any new vehicle purchase is going to include a painful search for what little inventory is out there, followed immediately by paying over MSRP for the few options you are able to track down on dealership lots. The issues are even worse if you’re in the market for a hotly anticipated new ride—just ask any Ford Bronco intender—and wait, you didn’t pre-order your car months ago? Good luck. All of which is to say it’s completely un-shocking (pun intended) that Ford’s all-new F-150 Lightning EV pickup is seeing some wild markup prices from unscrupulous dealers hoping to mint some cash at an overeager buyer’s expense.

The first of these markups first surfaced via InsideEVs, but a quick nationwide search for new F-150 Lightnings allegedly available right now on dealer lots (something of an “if” given how many pre-orders the Lightning has) revealed numerous examples priced over $100,000. Beyond the initial grouping of Lightnings being marked up by DCH Ford of Thousand Oaks, California—examples ranging from $130,940 for what a VIN check reveals to be an entry-level Pro with the extended-range battery (a version only available to fleet customers, per Ford; retail Pros are only supposed to be available with the standard-range battery and start at $41,769) to a whopping $145,309 for what appears to be yet another long-range Pro. Update: The dealership site has since updated with a “call for price” on its Lightning offerings.

Again, because neither of these options is supposed to be sold to non-fleet customers, we can only estimate the cost using the fact that the extended-range battery is a $10,000 option on the next-level-up XLT (where it also requires a $9,500 option package). Assuming one need only buy the ten-grand battery on the Pro and not be required to opt for other upgrades, that means the suggested retail price of the trucks DCH Ford is trying to pawn off is about $51,000. Don’t get us wrong, the Lightning is an amazing truck, but charging a nearly threefold markup for one? Really?

Those gouged prices almost make the $132,569 Lightning Platinum peddled by Dorsch East Ford in Green Bay, Wisconsin, look like a deal. After all, the range-topping Lightning Platinum officially starts at $92,669, making the relative markup fairly mild. And at least Dorsch is honest in its cars.com listing, noting in the description that the “price is $40K over MSRP.” Good to know!

We also found a $101,294 Lightning Lariat at Greenway Ford, though the description notes the truck isn’t actually for sale and is a demo model. A similar listing exists for another Lariat at Bill Kay Ford in Illinois, which notes the truck is a “mannequin unit.” In any event, the dealers throwing huge markups on Lightnings aren’t exactly doing anything new. In the past year or so, we’ve noticed massive five-figure markups on various full-size pickup trucks, six-figure “market adjustments” on exotic metal such as Mercedes-Benz’s G-Class SUV, and plenty of ambitious fleecing of Bronco and Mustang Mach-E customers.

At the end of the day, you can’t do much about these markups except avoid them by going to a different dealer or attempting to negotiate. Ford, like GM, has promised to withhold future vehicle allocations from dealers that attempt to gouge customers or sell off demonstrator vehicles, but that’s a distant punishment for a right-now issue. We suggest that anyone shopping for a super-in-demand vehicle, even those with reservations for one, press for a purchase agreement so that a price is in writing before the vehicle arrives at the dealer. And pay attention to those add-ons—interest rates are rising, but that doesn’t mean you should just accept a higher-than-expected rate furnished by a store’s finance person, even if you’re financing through an automaker. Dealers can offer you interest rates higher than what you actually qualify for (they’ll then take out their own financing on the car at a lower rate, pocketing the difference), so if a number seems suspect call them on it or seek a competitive rate from, say, your bank or credit union and start negotiating.

With inventory tight, it’s tough to find “deals” out there these days, but if you can avoid egregious markups (and brands with the most of them) and pay close to the sticker price, while remaining vigilant about other aspects of the deal, be it financing or lease terms, you can drive off in a new car in 2022 without feeling completely hosed. Just remember, most dealerships are raking in cash these days thanks to the favorable seller’s environment—you can and should scrape whatever you can for yourself.