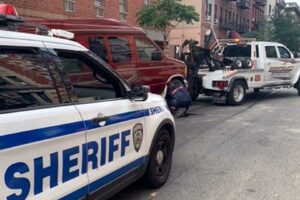 Ditching traditional homes for life on the road is certainly popular these days, but living in a 25-year-old conversion van on a New York City street? That doesn’t sound too appealing, especially when the van isn’t even registered properly. In this case, it’s not just one van but seven, and they were all reportedly listed as Airbnb rentals offering an authentic vanlife experience.

That’s the word from The NYC Sheriff’s office, which took to social media with photos and a brief overview of the situation. According to a Twitter post, seven “alleged fraudulent and illegally registered vans” parked on various streets in Manhattan were impounded. The post also states they were used as Airbnb rentals, though it’s not immediately clear if using vans on public streets for lodging rentals is actually illegal.

All the vans had New Jersey license plates, and The New York Post reports that some of the registrations had expired over 20 years ago. That’s definitely illegal.

It seems the vans had been in service as Airbnb rentals for at least a couple of years. CBS New York reports that authorities were tipped off in part thanks to a YouTuber who recently paid $97 for a one-night rental in one of the vans and posted a review of the experience. The review states the Airbnb host listed local bars and restaurants as places to use the bathroom, and while the experience was “cozy” it wasn’t something he was keen to do again.

These vans aren’t the strangest overnight accommodations we’ve seen on the popular destination website, but alleged illegal registrations and recommendations to use private businesses for restroom breaks are most decidedly sketchy. It’s unclear how many rentals the seven vans had before they were impounded, but the listings are no longer on Airbnb’s website and authorities are reportedly still investigating who the owner or owners might be.