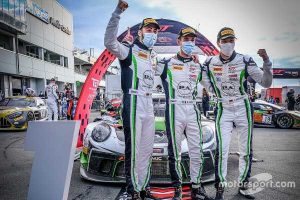 The trio started second on the grid following Saturday’s evening qualifying but made the most of a chaotic opening lap in which the polesitting GPX Porsche of Dennis Olsen was taken out of contention by Albert Costa’s Emil Frey Lamborghini at turn one.

Dinamic’s closest rivals came in the form of AKKA ASP Mercedes with Raffaele Marciello, Timur Boguslavskiy and Felipe Fraga on board, but they finished some 14.849 seconds adrift by the flag. HRT’s Maro Engel, Luca Stolz and Vincent Abril completed the podium in third after staving off a late charge by Dries Vanthoor’s WRT Audi, who eventually lost out to team-mates Mirko Bortolotti, Kelvin van der Linde and Rolf Ineichen on the last lap.

GPX Racing’s Romain Dumas, Thomas Preining and Dennis Olsen topped Saturday evening’s qualifying but their victory chances were all but extinguished following contact with Costa’s Lamborghini at turn one. The ensuing melee also forced off AF Corse’s James Calado at the same spot after hitting his fellow Ferrari of SMP’s Miguel Molina.

Engelhart inherited the lead and built a healthy margin of over 13 seconds over Boguslavskiy before the first round of pitstops.

Team-mate Cairoli extended this nearly half a minute as the second hour came to a close.

Two full course yellow periods followed over the next two hours, the first of which was caused by Mathias Lauda spinning his JP Motorsport Mercedes at the chicane, while Rob Collard was taken out of the Pro-Am lead by a wayward Mikkel Pederson at the same corner.

Boguslavskiy momentarily assumed the lead of the race after Engelhart brought the Dinamic Porsche into the pits for a second time in as many laps. This cost them the lead, but Engelhart quickly made amends at the restart, easily out-accelerating Boguslavskiy’s Mercedes on the exit of turn one.

While Engelhart leapt away at the front once more, the action was frenetic behind as Boguslavskiy came under increasing pressure from a charging Dorian Boccolacci with two-and-a-half hours to go.

The Sainteloc Audi driver had produced a number of impressive overtakes and forced his way past Boguslavskiy at the chicane. Having ceded the place back to Boguslavskiy for cutting the corner, Boccolacci immediately resumed his attack on the Russian at turn two but hit the Mercedes and spun.

Benefiting from the chaos in front was Pilet in the GPX Porsche who, after losing ground to both HRT’s Luca Stolz and the WRT Audi of Christopher Mies, emerged in second before himself going off at turn six, hitting the barrier.

Vanthoor had looked a solid bet to take up the fight to Dinamic following a fourth FCY – for Frank Bird’s Bentley which crashed at the exit of the chicane – but a drivethrough penalty for an unsafe release scuppered the Audi’s chances.

Somehow, Vanthoor found a way back into the mix in the closing stages and elbowed his way by FFF Racing’s Andrea Caldarelli at turn three to claim fourth, with the latter losing out to an aggressive move by Andy Soucek’s K-PAX Bentley.