Number plate scam: Drivers warned over fakes being stuck on cars before theft 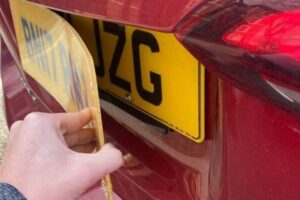 Car owners are being warned to be vigilant after a woman discovered fake number plates had been stuck on her car while it was parked in the street. She believes the car would have been taken by thieves.

Charlotte Grundy was returning to her vehicle outside her house in Hale, Greater Manchester when she saw her number plate was a different colour than usual.

After examining it she realised that the plate wasn’t her original, but a film-covered fake.

She told the Manchester Evening News: “Everyone is saying it was being prepped to be stolen.”

She also thinks thieves were planning to break into her home to steal the keys to the car.

She added: “We just don’t know. It’s quite scary.”

She explained that the area had seen other crimes recently including an armed robbery in the middle of the day.

Ms Grundy also had a car stolen back in 2019 while she was on holiday.

She said: “It’s supposed to be a nice area.”

The warning comes after Express.co.uk reported on two cars in the same street spotted with identical plates.

The pair of silver Mercedes cars were seen by a resident named John Gargett, who called the police after noticing the vehicles parked next to each other on his road in Rotherham, South Yorkshire.

He said: “Two cars parked across the street were on the same number plate front and rear.

“I reported this to 101. This was given a priority 8, and two PCSOs attended.”

South Yorkshire Police confirmed they sent officers to the street and spoke to the owners, Yorkshire Live reported.

According to the police, the identical vehicles are registered for different plates although one of the vehicles is being used for spare parts.

Officers say the identical number plates were placed on the wrong vehicle, but did not offer explanations as to how this may have happened.

“Advice has been given and the mistake is being rectified,” a spokesman for South Yorkshire Constabulary said.

It is illegal for two vehicles to carry the same plate.

Registrations are designed to not only be able to trace the owner of a vehicle, but identify the car itself when necessary.

However they are also now easier for cameras to scan and report on any driving offences.