Home » Car Reviews » ‘Not good’: Drivers warned against using common hypermiling techniques to save on fuel

‘Not good’: Drivers warned against using common hypermiling techniques to save on fuel 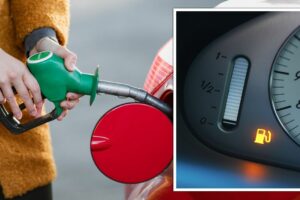 Hypermiling has exploded in popularity recently with all-time record high petrol and diesel prices forcing drivers to reevaluate their car usage. New research has found that 76 percent of people agreed they’re now more likely to use hypermiling techniques because of the recent rise in fuel costs.

People between the ages of 35 and 54 were most likely to be hypermiling.

Nick Zapolski, founder of ChooseMyCar, warned drivers that they should do their research before using any methods of saving fuel.

He added: “While hypermiling might be good for our pockets, some techniques are not good for our (or our car’s) safety.

“So before you become a hypermiler, take a look at some of our popular tried and tested fuel-saving tips.”

The data also found that Liverpool is the hypermiling capital of the UK, with 86 percent of drivers agreeing that they’re doing it now.

Other major cities including Norwich, Southampton, London and Birmingham complete the top five, with more than three quarters admitting to using hypermiling techniques.

Nick Zapolski has also compiled a list of some of the most common techniques and whether they would suit drivers’ needs.

The most efficient speed to travel at is around 56mph, although drivers are urged to remain sensible with speed limits, especially on motorways.

For each 5mph or 10mph in speed reduced, drivers can see a gain of between seven and 14 percent on their fuel economy.

Every time a driver uses the brakes, they are turning the fuel into heat and brake dust, with motorists being urged to avoid harsh braking.

The car should be naturally slowed before the driver has to force the car to stop, especially when speed limits are changing.

The less the brakes are used, the more natural resistance is used to slow the car, meaning the fuel efficiency is improved.

Mr Zapolski said: “Some cars will tell you the real-time MPG of your car as you’re driving along.

“This can be a great tool to help your driving become more economical, although this can be distracting so be cautious.

“Our advice: if your car can tell you what the current MPG of your travelling car is, there’s a chance it also has an eco-setting. Turn that on. It will prevent you from driving too erratically.”