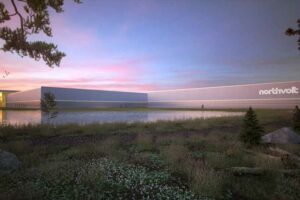 The Northvolt Ett plant in Sweden will produce 50% more batteries than previously planned.

Northvolt announced the signing of a new, and biggest so far, private placement of $2.75 billion in equity, to finance further battery cell production capacity and R&D efforts.

The latest round was co-led by Swedish pension funds AP1, AP2, AP3, AP4 and OMERS Capital Markets alongside existing investors Goldman Sachs Asset Management and Volkswagen Group. Volkswagen Group contributed $620 million (about €500 million) to the financing round to maintain its 20% or so stake in the company.

Since inception, Northvolt has raised in total more than $6.5 billion in equity and debt. The ambitious plan includes expansion of the battery manufacturing capacity in Europe to at least 150 GWh annually by 2030.

Northvolt says that so far it has secured in excess of $27 billion worth of contracts from key customers, including BMW, Fluence, Scania and Volkswagen. Volkswagen’s part is the largest, estimated at $14 billion.

Northvolt’s first battery cell gigafactory, Northvolt Ett, in Skellefteå, Sweden, is now planned to produce 60 GWh of batteries annually (“in order to meet the increased demand from key customers“), which is 50% more than the previous target of 40 GWh annually.

The factory is promised to commence production later this year.

“We have a solid base of world-class investors and customers on-board who share Northvolt’s mission of building the world’s greenest battery to enable the European transition to renewable energy.”

“We have been producing cells at our cell industrialization facility, Northvolt Labs, for more than a year and are excited to now bring the knowledge and technology we have developed to the north and start large-scale production,”

The broader plan of 150 GWh annually by 2030 includes a total of three battery plants. One of them will be in Germany (we know that Volkswagen’s acquired the “Northvolt Zwei” joint venture with Northvolt, so now Northvolt needs to find something else on its own).

“In order to meet its 2030 capacity target, Northvolt currently anticipates building at least two more gigafactories in Europe over the coming decade, and is actively exploring the opportunity of building the next of these in Germany.”