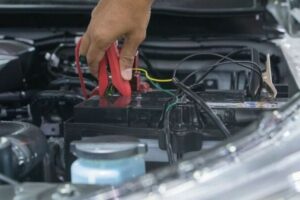 Construction of a Tesla Megapack in West Sussex

Flat batteries could be a thing of the past thanks to lithium-ion battery nanotechnology developed by The University of Queensland. The technology more than doubles the lifespan of highly sought-after high-voltage Li-ion batteries, which achieve higher energy density but last only several hundred cycles.

The team from the School of Chemical Engineering and Australian Institute for Bioengineering and Nanotechnology (AIBN) have demonstrated a battery which remains stable for more than 1000 charge/discharge cycles.

Lead professor Lianzhou Wang said: “Our process will increase the life-span of batteries in many things from smart phones and laptops, to power tools and electric vehicles.

“We’ve designed a uniquely-grown atomic-thin functional layer on the surface of a high-voltage cathode, which is the source of lithium ions and a critical aspect that limits the cycle life in a battery.

“Corrosion in one form or another is the reason that batteries degrade over time.

“This new approach features a minimal protective coating at a scalable process, paving the way for the deployment of these abundant high-voltage materials for next generation high energy batteries.”

The professor said that the development of lithium-ion batteries of lower cost, higher energy density and longer cycle life was vitally important.

He added: “We’re confident the nanotechnology will have widespread applications across industry, including in consumer electronics, electric vehicles and the energy storage sector.”

Manufacturers of electric vehicles are under huge pressure to find ways to ramp up the production of batteries as sales of EVs rocket.

Tesla for instance only last month opened a ‘gigafactory’ in Berlin able to produce around half a million battery packs per year.

Car makers have also struggled due to the rising cost of nickel which is present in lithium batteries, as well as part shortages due to the war in Ukraine and the Covid pandemic.

Global demand for nickel used in batteries is expected to rise more than 20 percent this year due to the rise of EVs.

But higher nickel prices may erode demand in the long term as companies will work to use less nickel or develop nickel-less batteries.

Meanwhile, a new report commissioned by the UK Government reveals the massive scale of investment required in infrastructure to support the nation’s transition to electric vehicles.

The Taskforce says annual sales of battery electric vehicles (BEV) will need to reach 2.5 million per year by 2035 if the UK is to achieve its net zero goals by 2050.

To put this sales volume into perspective, it is 13 times higher than BEV sales in 2021 and will account for as much as seven percent of forecast global BEV car production.

About 35 percent of drivers currently do not have off-street parking, which means they will be forced to plug in their EVs at the workplace, depot or public charging stations, according to the EVET.

The report also forecasts that the UK will need about 60,000 en route rapid chargers to support longer journeys, although it acknowledges the difficulty in making this scale of prediction.

If the number of BEVs on UK roads exceeds its forecast by just one percent by 2035, the country will need an additional 3,200 en route rapid chargers.