‘No end in sight’: Petrol and diesel prices keep soaring with ‘chilling impact’ on drivers 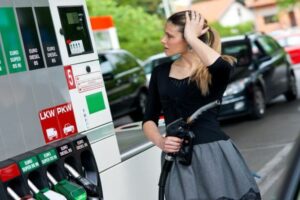 Around 46 percent of drivers say they’ll be forced to cut other household spending to account for the continuing rise in price of fuel. The RAC survey also found that a third of motorists are driving less because of the high costs at forecourts.

In the past few weeks, major milestones have been hit for fuel prices, with the RAC Foundation reporting that petrol prices are averaging at a litre for 146.6p.

More than 60 percent of respondents said they were worried about the high prices as they depend on their vehicles so heavily.

A further 48 percent are concerned because the rising fuel costs are coming at a time when household gas and electricity bills are also increasing.

Simon Williams, RAC fuel spokesperson said: “These figures throw a light on the chilling impact the current record high petrol and diesel prices are having on drivers every time they fill up.

“And there’s seemingly no end in sight – the price of unleaded is already up by more than 2p in November.

“And this, combined with the fact domestic energy costs are also spiking, means households need to brace themselves for what could turn out to be a particularly expensive winter.

“If the high prices are encouraging drivers to swap the car for walking or cycling on short trips, that’s no bad thing.

“But the simple fact remains that the car is a lifeline for many people and remains the only feasible way for them to complete so many of the journeys they need to make.

“For example, as our latest Report on Motoring shows, when it comes to visiting or caring for friends and family, for 68 percent of drivers the distance they have to travel is too far to go on foot or by bike.

“When it comes to grocery shopping, 78 percent said they relied on the car as they had too much to carry by any other means.

“This reliance on cars, coupled with the fact the cost of fuel represents such a large proportion of many households’ spending, should be ringing alarm bells in Government, but it’s not obvious the message is getting through.”