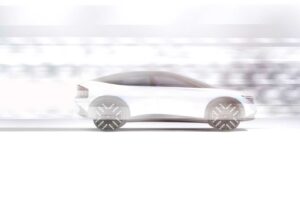 Set to be a global model, the new EV has a swoopy shape and massive wheels.

Having revamped most of its lineup (well, excluding the GT-R), Nissan is now looking to expand the portfolio with the addition of an all-new electric vehicle. It doesn’t have a name just yet, but we do know it will be a crossover following an investment of £423 million ($584.5 million at current exchange rates) as part of a £1 billion ($1.38 billion) EV push.

The money will be put to good use in what the automaker refers to as a flagship electric vehicle hub, dubbed “Nissan EV36Zero.” The electric crossover will be built in the UK at the Sunderland factory and will ride on the CMF-EV platform shared with the Ariya and Renault’s upcoming Megane-badged crossover. The assembly plant will be upgraded to create an annual production capacity of 100,000 units for the unnamed zero-emissions crossover, which will be exported to the same Euro markets as the other Sunderland-built cars (Juke, Qashqai, Leaf).

Nissan mentions its upcoming electric crossover will be a global model, meaning there are plans to build the EV elsewhere, but other production locations are going to be announced at a later date. Meanwhile, getting the Sunderland plant ready will require creating 909 jobs, plus more than 4,500 jobs in the UK supply chain along with safeguarding 75 jobs in the R&D department.

Time will tell whether the new crossover will eventually replace the Leaf or it will be sold alongside the all-electric hatchback. We do know the upcoming EV will benefit from next-generation batteries, and that should translate into a better range between charges. The battery packs will be built at UK’s first Gigafactory, located next to the Sunderland plant. It will be possible following an investment of £450 million ($622 million) made by Envision AESC (Automotive Energy Supply Corporation), which is a joint venture between Nissan and NEC.

The adjacent teaser image likely depicts a concept car rather than a production model since it lacks door handles and mirrors/cameras. Much like the Ariya, it has a swoopy roofline and massive wheels, but the headlights and taillights have a significantly different design that reinforces our opinion of a concept rather than the final product.

It will be interesting to find out the vehicle’s size in relation to the compact Ariya as it’s difficult to know for sure whether it’s bigger or smaller based on this sole image. For what it’s worth, Nissan hinted last year about coming out with a larger electric SUV, and we know the CMF-EV architecture has been engineered for midsize vehicles as well. If it does end up replacing the Leaf, logic tells us it will be smaller.