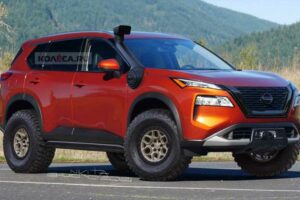 This a radical (but fictional) concept.

The Nissan Rogue (also known as the X-trail in some parts of the world) has got its next-generation revamp last year. Beyond the improvements in terms of design, among other things, one thing remains – it’s still a crossover meant to be driven on chartered roads and likely to never hit the dirt.

Our friends from Kolesa want to change how you look at the Nissan crossover with a fictional concept – a Rogue that’s ready to go off-roading. With the concept comes unofficial renderings and boy does it look gnarly and nasty, like it’s ready to go dirty.

You most likely won’t miss the increased ground clearance on this concept, thanks to the beefy set of beadlock rims and fat all-terrain tires. Front, side, and rear skid plates are also included for added protection underneath. For added functionality, the Rogue here also gets rear tow hooks and a snorkel.

While this isn’t really an official concept, we can’t help but admire how good off-road kits look on the Rogue. It looks ready to go head-to-head against off-road-capable crossovers like the Ford Bronco Sport, but we all know that the Rogue needed some help inside the engine bay if it were to take the fight to the Blue Oval.

Power-wise, though, the Rogue isn’t your best option. The naturally-aspirated 2.5-liter four-pot engine only produces 181 horsepower (135 kilowatts) and 181 pound-feet (245 Newton-meters) of torque, mated to a continuously variable transmission. If I were to convert this Nissan into an off-roader, I’d probably add turbochargers for added pull, plus I’ll do away with the CVT for either a torque converter automatic or a manual gearbox.

What do you think of this fictional Rogue off-roader concept? Let us know your thoughts in the comments section below.