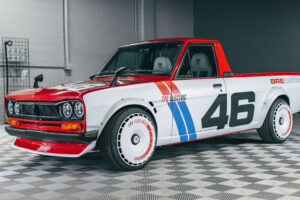 The group includes an electric pick-up truck, a retro SUV and a purpose-built racer

The SEMA Show in Las Vegas usually features some wacky concepts, and Nissan has certainly indulged us this year with a sextuplet of new show cars. It includes electric, performance and off-road vehicles that Nissan says “will inspire owners to customise their own vehicles for next-level excitement”.

One of the new concepts is based on our current car of the year, the Nissan Ariya, but it has been treated to a “woodie” makeover. Called the Ariya Surfwagon concept, Nissan claims it’s a California-style surf wagon, providing a glimpse of what electric car customisation could look like in the future.

The Surfwagon features a custom vinyl wrap with wood panelling, chrome exterior trim, white wall tyres, 20-inch wheels and a custom roof rack for surfboards. Despite the wild look, Nissan claims the concept retains all the utility and functionality of the standard car.

Elsewhere, the 1987 Nissan Sunny pick-up has been brought into the 21st century with power taken from the Leaf. The conversion sees a 40kWh battery swapped in with 147bhp and 320Nm of torque, meaning the concept has more than three times the power of the original.

Nissan’s mid-size pick-up truck for the American market is the Frontier. The Nismo Off-Road Frontier V8 concept is a pretty extreme interpretation of it, featuring a 5.6-litre V8, custom wide-track suspension with Bilstein shocks and a wide body kit with carbon fibre front wings.

Another Frontier has been used to create the Frontier Street Truck Project. It’s a lowered truck inspired by the 1990s truck scene in the US. It features custom suspension, a wide body, a MagnaFlow cat-back exhaust, Alcantara upholstery and 20-inch alloys.

SEMA will also host the public debut of the new Nissan Z GT4 – a new race car that will compete in GT racing around the world in 2023.