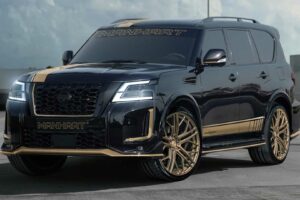 The sixth-generation Nissan Patrol has been out for nearly 13 years, but one tuner is still focusing on the venerable SUV. Although Manhart made a name for itself by upgrading BMWs, the German aftermarket specialist has been thinking outside of the Bavarian box lately with other projects. We’ve seen amped-up versions of the Defender, Audi RS3, and AMG SL. After a bunch of Euro cars, it has now decided to work its magic on a Japanese vehicle.

Look beyond Manhart’s typical black and gold livery and you’ll realize this isn’t your run-of-the-mill Patrol. Indeed, it’s based on the hotter Nismo version that came out in late 2015 before being facelifted early last year. The two-tone performance SUV seen here started out as the updated model before receiving gargantuan 24-inch wheels. It has also been brought slightly closer to the road for a meaner stance.

It continues to use the 5.6-liter V8 as the Patrol Nismo, but it’s no longer naturally aspirated. Manhart has slapped on a supercharger to take output to a meaty 650 horsepower and 600 Newton-meters (443 pound-feet) of torque. As a refresher, the stock model makes 428 hp and 560 Nm (413 lb-ft) sent to both axles via a seven-speed automatic transmission. To complement the upgraded engine, there’s now a custom exhaust delivering a more aggressive soundtrack.

There is no word about how the supercharger kit has positively impacted performance, but we will remind you Nissan says the regular Patrol Nismo does 0 to 62 mph (100 km/h) in about 7.3 seconds. That might not be overly impressive, although it’s not too shabby considering the mastodont weighs a whopping 2,665 kilograms (5,875 pounds).

The extravagant black and gold theme continues inside where it’s obvious the Nissan Patrol has been around the block for quite some time. Manhart tried to spruce up the cabin with fancy leather and Alcantara, but there’s no denying the interior looks outdated when you compare it to the latest crop of fullsize SUVs.

Although these are only official renderings for the time being, the tuner is accepting orders for the souped-up SUV sold in the United Arab Emirates.