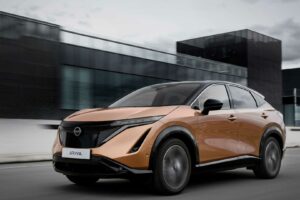 According to a recent report published by Automotive News, Nissan may deliver an unwelcome blow to dealers as it launches its brand-new fully electric SUV: the Nissan Ariya. The Ariya isn’t cheap, but neither are most electric crossovers. Regardless, Nissan is reportedly looking for a way to help offset high Research and Development (R&D) costs.

The Japanese brand has reportedly already shared with dealers the necessity to offset the Ariya’s steep costs, though the automaker has declined to confirm the talks. However, it hasn’t yet come to a final decision on how to alleviate the problem. According to the article, Nissan may cut dealers’ margins on the electric SUV by 2.5 percent.

Automotive News writes that the potential plans would give dealers 8.5 percent of the Ariya’s sticker price. Currently, those same dealers get an 11-percent margin on the sale of gas-powered vehicles. A Nissan spokesperson shared via Automotive News:

“We are working closely with the dealer network to ensure that our programs deliver strong customer satisfaction and preserve the long-term financial health of our dealer partners.”

While Nissan has had the all-electric Leaf on the market for many years, it hasn’t yet followed it up with a new EV. This is where the Ariya comes in, paving the way for the brand’s next-generation EVs.

As emissions requirements become more stringent across the globe, automakers may have no choice but to produce more efficient vehicles. However, as many have stated over the years, the cost involved in transitioning to EVs is substantial. Reuters notes that automakers across the globe will spend some $515 billion on electric cars and batteries between now and 2030.

The change in dealer margins could be a somewhat simple way for brands to recoup some of the reduced profits, though it will also cause concern for dealers. One anonymous Nissan dealer told Automotive News:

“I need to make more money on the sale of the EV because there will be much less long-term revenue from service and parts. I need to see a bigger upfront margin to operate a dealership profitably.”

Dealers are also expected to spend money transitioning their facilities to be better-suited for EV sales, which is also expensive. One dealer told the publication it has to invest $30,000 to $70,000.

Some dealers believe that a vehicle’s R&D costs shouldn’t fall on them. Rather, if a car cost more to produce, it should simply have a higher MSRP. However, automotive brands also must compete on vehicle prices. If the cars are too expensive, consumers may look elsewhere. That said, if the margin is reduced, and dealers decide to markup the cars to make up for the difference, it may stifle sales just the same.