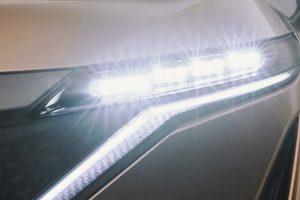 Nissan has teased the Ariya yet again ahead of an official debut later this week, revealing bit more of the electric crossover’s production skin. The EV was first previewed at last year’s Tokyo Motor Show and is one of several new models that the carmaker plans to debut over the next few months.

The two video teasers show cues that we have seen before, including the model logo that doesn’t deviate too much from the concept logo. The flashy paintjob seen last week also makes a return here, although we also get to see a white example that reveals the charging port on the right side of the body.

Elsewhere, the LED headlamps have been revised but still appear to remain true to the concept, with a four-element lighting setup and a light bar that frames the modern V-motion grille. The rear also gets a strip of light between the taillights, albeit without the 3D effect of the concept.

Around back, we spot the e-4ORCE badging for the first time, which points towards the dual-motor powertrain that the Ariya will get. Nissan previously showcased the setup at this year’s Consumer Electronics Show (CES) with a Leaf development unit.

There’s not a lot to talk about the interior, save for a shot of the window controls on the driver’s side, which again, doesn’t deviate that much from the concept. We’ll only get full details about the Ariya when it makes its debut in just a few days’ time, so stay tuned.