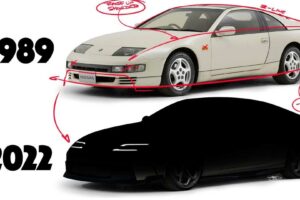 The new 2023 Nissan Z is an exciting addition to Nissan’s lineup with styling inspired by the original 240Z. The iconic body lines of the 240Z may define the new Nissan Z, but what if Nissan took inspiration from another past Z car for their new sports car?  Thankfully car designer TheSketchMonkey is here to show us what a modern 300ZX would look like.

The Z32 300ZX debuted in 1989 and was a huge departure from the design of previous Nissan Zs. In fact, the new 300ZX was meant to signify a new dawn for the Nissan Z as a modern sports car ready to take on other 1900s rivals like the Toyota Supra, Mazda RX-7, and Mitsubishi 3000GT.

The Z32 300ZX was lower and wider than its Z31 predecessor and took on a new modern design language with smooth lines and sculpted body panels. The VG30DE 3.0-liter V6 was significantly upgraded over the previous generation car and featured dual-overhead cams and variable valve timing. In its naturally aspirated form, the VG30DE produced 222 horsepower (166 Kilowatts) and 198 lb-ft (268 Newton Meters) of torque. The top-of-the-line Turbo 300ZX featured a twin-turbo VG30DETT 3.0-liter V6 engine that produced an impressive 300 horsepower (224 Kilowatts) and 283 lb-ft (384 Newton Meters) of torque.

The new Nissan Z features a twin-turbo charged 3.0-liter V6 engine which makes it a cousin to the old 300ZX.

The turbo-charged Nissan 300ZX was a complicated car that used cutting-edge technology to improve performance. Nissan included exotic features like an adjustable two-mode suspension system and rear-wheel steering. The Z32 300ZX was also one of the first cars to be designed with the use of CAD software making it a pioneer in the modern car design world.

The Z32 300ZX was a massive sales success for Nissan with over 1 million units sold to the American market in 1990. Unfortunately, like all of the great Japanese sports cars of the 1990s prices began to climb at an alarming rate spelling the end for the complex high-cost 300Zx. Sales for the 1996 model year fell to only 80,000 units and the 300ZX exited the American market.

Luckily we have a new Nissan Z and a new Toyota Supra to bring back the Japanese sports car to American markets.

Today the 300ZX is a standout in the Nissan Z lineup as a unique curvy sports car that allowed Nissan to push the limits of Nissan Z car performance. As one of the first modern sports cars designed with the use of CAD software this groundbreaking icon deserves a rebirth with a modern design.