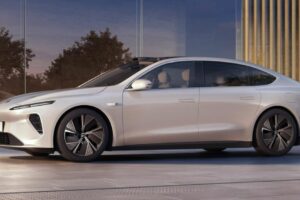 Chinese electric vehicle company Nio, currently positioned as a maker of premium electric vehicles, is building up a sub-brand for mass-market models to compete in the mainstream segment populated by brands such and Volkswagen and Toyota, according to Reuters.

“The relationship between Nio and our new mass-market brand will be like that of Audi and Volkswagen as well as Lexus and Toyota,” said Nio CEO William Li, adding that Nio aims to “provide better products and services at prices lower than [Tesla’s].” Products currently in the Nio line-up include the ES8, which was listed from US$67,715 (RM275,924) at its launch, and the ES6 from 456,000 RMB (RM276,760).

To that end, a “core team” has been assembled as “a first step of a strategic initiative,” Li said, adding that the new, mainstream-oriented sub-brand would not produce cars to rival the likes of the Wuling Hong Guang Mini EV, which is priced from RMB 28,800 (RM18,803) in China.

Nio plans to roll out three new models next year, one of which is the ET7, though CEO Li did not specify what the other two models will be, except to note that these will be developed on a new platform. This means the electric carmaker will not be releasing new models this year, according to Reuters. The Shanghai-based carmaker made headlines when it took its quad-motor EP9 around the Nurburgring Nordschleife circuit, where the 1,341 hp two-seater clocked a time of six minutes 45.9 seconds, making it the quickest car around a lap of the German circuit at the time.

Nio achieved a production milestone of 100,000 units on April 7 this year, which was an ES8 SUV. The milestone was achieved just 1,046 days after the ES8 entered production, while Nio rolled out its 50,000th vehicle in July last year.

At the end of April, Nio announced the confirmation of its expansion into Europe with its entry into Norway, which was considered a goof entry point for the brand due to the country being a world leader in the take-up of electric vehicles. Nio then announced in the following month of May that it will build a “full-fledged ecosystem encompassing cars, services, digital experience, and lifestyle and build a community,” with the first Nio House location outside China to officially open in Q3 2021 on Karl Johans Gate. The brand’s first service and delivery centre in Oslo is scheduled for opening in September.

Its sales and service network in Europe will be complemented by the establishment of a network of Nio Power Swap Stations, where users will be able to quickly switch out depleted batteries from their vehicles for charged units. Nio plans to have battery swap stations on routes connecting five major cities and freeways in the region by the end of 2022.

The beginning of this year saw the debut of the Nio ET7, which boasted of a battery range exceeding 1,000 km courtesy of its 150 kWh battery pack, while its 653 PS/850 Nm dual-motor powertrain enabled a 0-100 km/h sprint time of 3.9 seconds. The self-driving capability is offered on the ET7 as a subscription service for 680 yuan (RM424) monthly, which could achieve Level 4 autonomous driving by 2022.