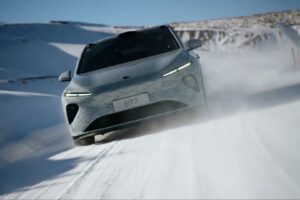 Since China is hot this time of year, Nio shipped an ET7 prototype to New Zealand for an entire month of winter testing.

Until then, Nio engineers are testing the car in various locations to bring it closer to mass production. In July, the ET7 completed its most recent test in winter conditions in New Zealand, since China is pretty hot during this time of year.

The prototype shipped Down Under undertook “a systemic and complete collection of dynamic tests on all types of low-adhesion roads to ensure a safe and comfortable driving experience for users in different scenarios.”

Nio says the winter evaluation was a fundamental and indispensable part of testing. The team spent the month testing the ET7 at the Southern Hemisphere Proving Grounds (SHPG) near Queenstown. The site includes 37 snow flats, ice flats, and handling tracks on about 4.9 million square meters (1,210 acres) of land.

“The winter test allowed snow flats, snow and ice circles, ice flats, bumpy roads, gradients, and handling tracks, which have helped verify such features as ABS, ESC, TCS, and others to ensure stability and controllability of the Nio ET7.”

The Chinese carmaker says it will continue to put the ET7 through “a series of rigorous global tests” until its launch.

At the January unveiling, Nio said the ET7 mid-size electric sedan would offer three lithium-ion battery options (70 kWh, 100 kWh, 150 kWh), with the largest one enabling a driving range of 1,000 kilometers (621 miles) on the NEDC cycle.