Nico Rosberg Goes Sideways In A Porsche Taycan Around The Nurburgring 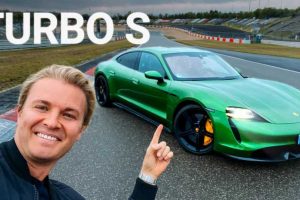 Porsche really seems to have produced a very fitting car for current times, with its Taycan, an electric vehicle that still retains the brand value of offering an exciting drive but without producing tailpipe emissions. It has been praised by all manner of reviewers, but when an ex-Formula 1 champion gets behind the wheel, drives it quickly and says positive things about it, well that makes it even more desirable.

Nico Rosberg’s YouTube channel is filled with videos of him driving various exciting performance cars, but before this latest one was uploaded, he had not previously driven the Porsche Taycan. Now he’s had a go in the top of the range Turbo S model which he drove around the Nurburgring (both around the GP track and the Nordschleife).

And to make matters even more thrilling, he drives the car on quite a wet track. This means he has to work quite a bit harder to keep it pointing the right way – you can see him sawing at the wheel from time to time. It also means he is able to slide the car around corners more easily than in the dry, which he thankfully does more towards the end of the video.