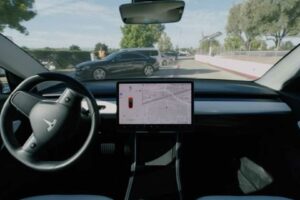 The reports will not only be required in situations when self-driving tech was enabled during or just before an accident.

Whenever a car that was driving itself crashes, this always prompts strong reactions from the public, asking for tighter control on what cars are allowed do on their own. Automakers are legally covering their side by explicitly saying that you cannot and should not rely on Autopilot-like systems to drive a vehicle without driver supervision, but now the National Highway Safety Administration (NHTSA) wants the cars to provide reports in the event of a crash.

The NHTSA is pushing for cars to provide reports that can be studied in order to better understand what happened, in the event of a crash that occurred while automated driving was enabled, or just before it was enabled. The organization has issued an order earlier this week asking automakers to report any and all such self-driving-related accidents.

By mandating crash reporting, the agency will have access to critical data that will help quickly identify safety issues that could emerge in these automated systems. It will help instill public confidence that the federal government is closely overseeing the safety of automated vehicles.

And not just automated driving-related crashes will have to be reported, but also all accidents that resulted in injuries that required hospitalization, fatalities, airbag deployment or those that involved pedestrians and bicyclists in vehicles equipped with active safety aids in a vehicle with Level 3-5 capability. The same will apply for any crashes in vehicles with Level 2 active safety systems (such as lane keep assist, adaptive cruise control) and all have to be submitted within one day of the accident.

The NHTSA also mentioned that if companies fail to comply with this new requirement, they will face ‘serious enforcement consequences’ and ‘substantial civil penalties.’ Even if an automaker has no eligible crashes to report, it will still be required to provide a monthly report in which this is stated.

The agency has apparently finally heard the Center for Auto Safety’s long-standing call for the federal government to engage in oversight of the unregulated technology currently being tested on America’s roads with neither a warning to the residents, nor any data being collected.