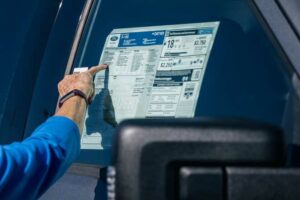 The new NHTSA order calls for an 8 percent fuel economy increase for model year 2024 and 2025, and then a required bump to a 10 percent increase fleet-wide for the 2026 model year, to achieve the final standard. The estimated fleet-wide average is now required to grow by 10 mpg by that year compared to 2021 figures, at around 39 mpg currently. Keep in mind that that CAFE mile-per-gallon figure is calculated differently than the ones you see on new vehicle window stickers, so this isn’t exactly representative of the sort of mileage you’ll see on average from automakers. Cars are divided up by the size of their footprints, which determines which mileage standards they adhere to, and their fuel economy is weighted differently.

NHTSA claims American oil consumption has dropped by 25 percent since the original CAFE (corporate average fuel economy) standards were introduced back in 1975, reducing average consumption by up to 5 million barrels of oil per day since. The new standards are expected to reduce consumption by 200 billion gallons of gasoline by 2050. (In 2011, the U.S. Office of Energy claimed we produce about 19 gallons of gas per barrel of oil.)

That achieves President Biden’s stated goals of reducing the U.S. reliance on fossil fuels, and preventing international events, like Russia’s invasion of Ukraine, from having as dramatic an impact on the American economy in the future. The President also ordered a record-high release of the U.S. oil reserve to keep gas prices down for the rest of the year, and issued a new directive to use the Defense Production Act to bolster production of electric vehicle battery materials for future BEVs that are anticipated to replace ICE vehicles.

“Today’s rule means that American families will be able to drive further before they have to fill up, saving hundreds of dollars per year,” said U.S. Transportation Secretary Pete Buttigieg. “These improvements will also make our country less vulnerable to global shifts in the price of oil, and protect communities by reducing carbon emissions by 2.5 billion metric tons.”

If you’re wondering if new strict standards means the price of new cars will have to go up, NHTSA’s documentation shows average per-vehicle cost increase should be under $2,000, which is what the cost would have been for an even stricter new standard that NHTSA was considering, but ultimately declined to issue in favor of today’s announced standard.

A stricter proposed alternative would have increased average per-vehicle costs by as much as $2,000, but NHTSA says its chosen plan announced today is less than that. It would appear any stricter standard by 2026 would be too costly to justify, so the presented plan is “the maximum feasible alternative that manufacturers can achieve for MYs 2024-2026.”

From NHTSA’s final order today: “NHTSA expects that financing new vehicle purchases reduces the cost of fuel economy standards to consumers by allowing them to spread them out over time… The sales effects we estimate, even with the most stringent regulatory alternatives, are modest.” NHTSA cites increasing year-over-year car sales, despite supply shortages and a pandemic, as indications Americans will have no issue with any CAFE-related cost increases.