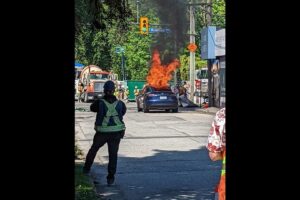 There have been a few Tesla electric car fires in the news recently, and some media outlets and individuals seem to be getting confused about which is which. To be clear, the US National Highway Traffic Safety Administration (NHTSA) is now requesting information about the Model Y fire in Canada that happened while the car was in motion.

Another recent Tesla fire, which we also covered, happened in the States. It involved a Model 3 that was parked in California City. The Model 3 wasn’t running or charging. We’ll have to wait and see what comes of this related fire. NHTSA told Reuters it “is aware of the incident and has reached out to the manufacturer for information.”

At any rate, as we previously reported, Tesla Model Y owner Jamil Jutha was driving his electric crossover when it alerted him of an error, powered down, started smoking, and suddenly caught fire. He ended up breaking the driver’s side window to escape from the vehicle before it was in flames.

Tesla’s cars have an emergency door release, which is often confused with an actual door-opening handle and can be used as such. However, Jutha said it was difficult to figure out amid the high-stress situation. He shared:

“The doors wouldn’t open. The windows wouldn’t go down. I kicked through the window, climbed out, and called 911 right away.”

Just yesterday, May 26, 2022, the NHTSA explained that it had requested information from Tesla about the Model Y’s spontaneous combustion that occurred in Vancouver, British Columbia. More specifically, the NHTSA provided that same comment to Reuters as it did about the Model 3 fire. The organization “is aware of the incident and has reached out to the manufacturer for information.”

These Tesla fires, as well as the NHTSA’s involvement, are developing stories. As new details are made public, we’ll keep you apprised. In the meantime, head down to our comment section and share your thoughts.