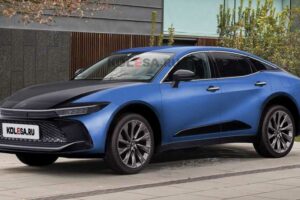 For 15 generations, the Toyota Crown has been mainly sold as a rear-wheel-drive sedan that exudes sophistication and class. So much so that the Crown sedan was popularly used in Japan for transporting government officials.

And while there were times when the Crown nameplate was used for coupes, wagons, and even a pickup, as well as a crossover and a minivan in China, the Crown has always been officially a sedan since 1955.

But that’s about to change in the next-generation Toyota Crown as revealed in the leaked patent images from Japan. Our friends from Kolesa took the liberty to make unofficial renderings based on those patent images, which you can see below.

As you can see, the next Toyota Crown is reportedly going through a radical body style update. It now sports a high-riding fastback body, reminiscent of the Citroën C5 X and the recently revealed Peugeot 408. Even more polarizing is the differently colored hood and trunk lid, along with the garnishings on the side and the plastic claddings.

Kolesa practically added colors to the patent images to give life to the black and white sketches. The images here show a blue hue for the paint job, showing a stark contrast between the body and the darker parts of the vehicle.

Details are scarce about the upcoming Crown, though it will reportedly arrive as the Crown Cross. It will reportedly be bigger than the outgoing S220 that has been around since 2018. Sources from Japan said that it will be powered by a four-cylinder 2.5-liter hybrid engine or a turbocharged 2.4-liter with an electric motor and a six-speed automatic.

We’ll know more details about the next Toyota Crown in a few days as its debut will reportedly happen on July 15. Whether it will be the alleged Crown SUV for the US, that’s still uncertain at this point.