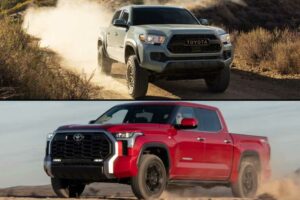 It’s no secret that Toyota is actively working on the next-generation Tacoma midsize pickup and the similarly sized 4Runner SUV, and while it may take another year or two for the all-new body-on-frame vehicles to arrive, we unearthed some more details about the upcoming models.

Cooper Ericksen, group vice president of product planning and strategy for Toyota Motor North America and Bob Carter, executive vice president of sales, say the company is planning to roll out the body-on-frame TNGA-F platform in a similar fashion as it did with its modular unibody TNGA-K car platform.

The TNGA-K platform was first introduced on the Camry, and it now supports all of Toyota’s unibody vehicles—from the Corolla to the compact RAV4 to the three-row Highlander SUV. Ericksen says the new TNGA-F platform, which was developed for body-on-frame vehicles and currently supports the Tundra, Sequoia, Lexus LX600, and global Land Cruiser not sold here, will continue to expand across the lineup.

“On the truck side it’s the same strategy. [TNGA-F] is the first platform developed for our trucks. So, we’re going to start to roll that out on all our brand-based trucks, and it’s going to offer dramatic improvements”, Ericksen adds. This means the smaller body-on-frame vehicles like Tacoma and 4Runner will most likely be based on the TNGA-F platform, which should modernize their driving dynamics without reducing their capabilities.

Carter says the adaptability of the TNGA-F platform allows Toyota to modify it easily. “[The platforms] can be lengthened, they can be widened, the rigidity can be stiffer. It has given us more flexibility, so the lineup is stronger than ever.”

Besides offering more flexibility, the TNGA platform also allows Toyota to spend less time (and money) developing the vehicles, per Ericksen. “TNGA is more than just the platform of the vehicle, is an engineering philosophy where you take the time to engineer certain components to be optimal and class leading. And the next vehicle that needs to be developed you don’t need to re-develop that same thing. It carries over, so it’s commonality. That takes man hours out of development products. We have the same number of people, but we can now develop more products,” he said.

Carter also mentioned that Toyota is looking to expand its truck lineup, and although there’s nothing on sight right now, it’s something they’re looking at. “You can expect both of those areas—unibody and body-on-frame—not only for us to stay where we are with the nameplates, but we could potentially expand the nameplates on both sides. We could have unibody SUVs that we don’t have represented in the lineup but we could also have an expansion of body-on-frame in the future,” Carter added.

One of those possible lineup expansions we reported recently: Toyota is considering a compact truck to take on the Ford Maverick and Hyundai Santa Fe. But as such growth pertains to body-on-frame vehicles, it could also bring an rugged, FJ Cruiser-sized SUV to the lineup to fill the longstanding gap that model has left behind since it disappeared in 2014.