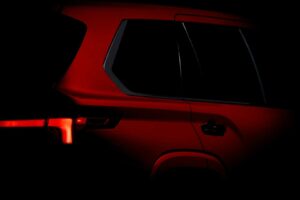 A tweet from Toyota offers the first glimpse of what we are fairly confident is the next-gen Sequoia. The current iteration of the big SUV dates back to a debut in 2007, so it’s definitely time for an update.

The teaser (embedded below) only shows the rear pillar of the SUV and offers no other details. From what’s visible, the lines are sharp and give the new Sequoia an upright, angular look.

Also, there appears to be a little inspiration from the latest Toyota Land Cruiser in the new Sequoia’s design. The Land Cruiser has a thicker D-pillar, but both models have an upward kink at the base of the window.

The front of the new Sequoia is still a mystery, but we’re expecting similarities with the new Tundra, which rides on the same platform. That would be a massive grille occupying the nose and Y-shaped headlights.

Inside, the large physical footprint means lots of room for the three rows of occupants. The current Sequoia looks old-fashioned in the cabin because of its tiny infotainment screen. With the Tundra as a guide, you can expect an available display that measures up to 14.0 inches or 8.0 inches as standard.

Look for the powertrains to come from the Tundra, too. The truck comes standard with a twin-turbocharged 3.5-liter V6 with 389 horsepower (290 kilowatts) and 479 pound-feet (649 newton-meters). As an upgrade, there’s the i-Force Max engine that adds an electric motor to the mix to make 437 hp (326 kW) and 583 lb-ft (790 Nm). Rear- and four-wheel-drive layouts would be available.

Toyota isn’t saying when the new Sequoia debuts other than saying that it’s “soon.” That generally means that the premiere should happen within a couple of months. Expect to see the SUVs at dealers before the end of the year.