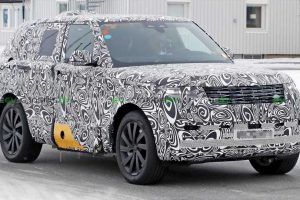 It looks like an evolution of the current model’s design and underneath it is related to the cancelled Jaguar XJ electric sedan.

We’re expecting to see an all-new Range Rover debut in either late 2021 or early 2022 and, just like the model it will replace, there will be ICE and electrified powertrains to choose from. Our spies recently snapped the plug-in hybrid version of the next big Range, but we don’t know if the manufacturer is planning a fully-electric variant, even though the platform it’s built on does, in theory, support it.

Regarding the look of the next Range Rover, the camouflage reveals that it will be an evolution of the current model, with a little bit of Velar flair sprinkled on top. The rear flanks are also different to what we see on the current model, and they look a lot like those of the Rolls-Royce Cullinan, hinting that Range Rover may go after that more expensive model with its most luxurious variants.

Inside, the Range Rover already had plenty of screens (digital gauge cluster, infotainment and climate control) and it looks as if the new model will continue in that direction. Just like the current plug-in hybrid model, the new one will still pair a 2-liter four-cylinder turbocharged gasoline engine with an electric motor and a battery pack, but we don’t know how much power it will make, how big the battery will be or anything about its electric-only range.

The current Range Rover P400e makes 398 horsepower and it draws from a 13.1 kWh battery pack that gives it an estimated EPA electric-only range of 19 miles (30 km). It currently can only charge at 7.4 kW, the new model will most likely support DC fast charging at up to 50 kW, like the new Land Rover Defender P400e PHEV (that also has a bigger 19.2 kWh battery).

There are currently no confirmed plans that we know of to also make the next-gen Range Rover fully-electric. However, we have heard rumors that the manufacturer is indeed going to launch a Range Rover BEV, in 2024; we don’t know if it’s going to be a version of the ICE model or an entirely different one.