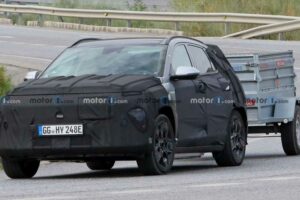 The Hyundai Kona Electric isn’t expected to debut until sometime next year. Our spy photographers have been capturing the next-gen model out testing since February, but the crossover continues to wear deceptive camouflage and cladding. New spy photos show Hyundai still developing the vehicle, with this example towing a trailer.

While the photos don’t reveal anything new about the exterior design, they do confirm the location of the crossover’s charge port. One of the photos shows the electric vehicle charging, with the cable plugged into the port in Hyundai’s grille.

Hyundai hasn’t released any powertrain details for the Kona Electric, but the next-generation Kia Niro EV provides a few clues as the two models are corporate cousins. The Kona Electric should pack the same 68.4-kilowatt-hour battery and the same 201-horsepower (150-kilowatt) electric motor as the Kia. The new battery would be slightly larger than the current Kona Electric’s 68.0-kWh one. It should produce 188 pound-feet (255 Newton-meters) of torque.

Photos of the cabin reveal the dual-screen display on the dash. Previous spy shots revealed this feature, but the new pics show the screens displaying graphics for the first time. It’s likely the same size and layout as the Hyundai Ioniq 5 crossover, with the two likely sharing other interior styling cues. We still have to see the instrument panel underneath the screen to see how similar the two interiors are.

Hyundai still hasn’t announced when it will reveal the new crossover, which we expect to arrive with hybrid and conventional gas powertrains, just like the current model. We expect a hotter Hyundai N variant sometime in the future, but not until after the regular Kona debuts, and we wouldn’t be surprised if that didn’t happen until sometime early next year. As the reveal approaches, we hope Hyundai starts to remove some of the camouflage.