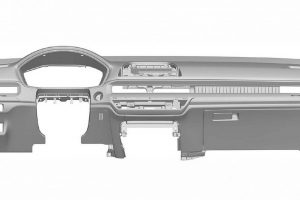 More patent images of what is likely the 11th-generation Honda Civic have been discovered by members of the Civic11 forum (1, 2), again from IP Australia (1, 2). This time, we get to see what the interior of the new Civic could look like, particularly with regards to the design of the dashboard and steering wheel.

Pictured here in left-hand drive guise, the first thing you’ll notice is how significantly different it is compared to the current, tenth-gen Civic. For starters, the infotainment system appears to get its own dedicated spot at the top of the dash and is now separated from the climate controls by slim air vents.

Those air vents, along with the ones at the edges, are located on a horizontal plain that spans the width of the dashboard, which is reminiscent of the Accord, and lends a uniformed and cohesive look, unlike the tenth-gen model. Other noticeable details include the repositioning of the engine start button closer to the centre stack and a simpler-looking cowl for the instrument cluster.

The steering wheel also gets an overhaul to mimic what you’ll find in the latest City, with a hexagonal-shaped centre boss and a four-spoke design. While the on-wheel controls do appear to be a direct copy of the City’s, we spot a scroll wheel on the left spoke, although its function is unknown for now.

So, what do you think of the new Civic’s dashboard and steering designs? Is it a major improvement over what we get currently? We’ll only know more when the model is revealed in full, with reports claiming a debut is set to take place later this year.