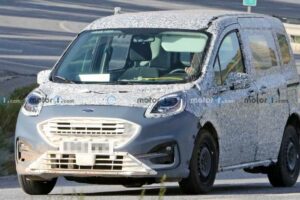 While Ford’s small van plans in the US are up in the air, things are different in Europe, where the automaker just launched the 2022 Tourneo Connect. The Transit Courier, also known as the Tourneo Courier, slots below the Transit/Tourneo Connect in the Blue Oval’s European lineup. It rides on the same platform as the Fiesta, debuting nearly a decade ago, and its next-generation replacement is finally in development.

New spy photos capture the city-sized van covering most of its exterior with a tight-fitting camouflage wrap with a portion of the front fascia exposed. Both front grilles are covered alongside parts of the headlights, but a lot of the bumper is also visible, including the fog lights located on the face’s outer edges. The rest of the van has the segment’s typical boxy design, but it’s not final and should change before it enters production.

The current Tourneo Courier shares a platform with the bite-sized Fiesta, but it’s unclear if the new model will continue that partnership. The van in the spy shots looks a tad larger than the current model, and its front-end styling looks like the Ford Puma. The headlights have the same shape but different internals, and even the fog lights look like they are located in the same position between the two vehicles. The Courier’s exposed front fascia also features styling touches similar to the Puma’s.

The new Tourneo Courier could ride on a modified Puma platform. The photos reveal the van with five-lug wheels, up from four on the current model and the previous-generation Fiesta. Lending credence to the idea that the new van could have Puma underpinnings is that Ford plans to begin producing a new light commercial vehicle in the same factory as the small crossover starting next year. Ford hasn’t confirmed what vehicle that’d be, but this new van fits the bill.

Powertrain details are a mystery, but customers should expect gasoline, diesel, and electrified options. The ICE variants should debut sometime next year. A fully electric version is likely, but it won’t break cover until 2024. US customers shouldn’t expect this small van to reach our showrooms. It’s too small for American tastes, and we’d rather have the Puma, anyway.