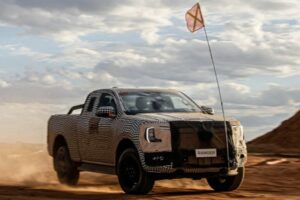 A new generation of Ford Ranger is on the horizon and the Blue Oval’s Australian arm is putting out the teasers to prove it. Wait, Australia? What about us Yanks?

Well, there’s not a peep coming from Ford’s North American operations regarding this redesigned Ranger at the moment, but if the current midsize truck that Ford sells in the United States is anything to go by, then this new Australian-market model might provide a preview of what’s to come our way.

This is due to the fact that today’s U.S. Ranger is largely based on the model Ford sells in a number of international markets, including Australia. In fact, it’s possible the next-generation Ranger will offer more uniformity between the U.S. model and its international counterpart. After all, we presume Ford’s engineering the model with U.S. regulations in mind from the start. Recall that the current-generation Ranger was not originally earmarked for our market, thus when Ford later decided to sell the pickup in America, it had to fiddle with the vehicle to make it U.S. compliant (and match American consumer preferences).

If our assumption is correct, then the truck teased here ought to give us a good glimpse of what to expect of the U.S.-market’s redesigned Ranger (heck, one of the trucks in the video even clearly notes it’s “left hand drive” on the tailgate, a clue that this generation of Ranger is certainly destined for markets beyond right-hand-drive Australia). Admittedly, it’s tough to glean too much about the new Ranger’s styling due to the extensive camouflage on the extended and crew cab test trucks featured in the above video.

That said, Ford does provide a reasonable glimpse of the new Ranger’s front end, which looks far blockier than before. The truck also sports LED headlights with thin light strips along the edges of the lamps. While the front-end camouflage gives the impression the new Ranger’s headlights will feature a boomerang-like shape, we think that underneath those covers are a set of squarer units that largely mimic the shape of the compact Maverick’s.

Nevertheless, we ought to know more about the truck’s design and various mechanical bits soon, as Ford Australia notes the vehicle’s reveal is set for sometime later this year.