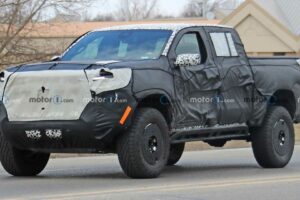 Here’s a fresh look at the next generation of the Chevrolet Colorado testing in rugged ZR2 trim. This one is on the road in the Detroit metropolitan area.

The truck is under two layers of camouflage. There’s a wrap on the body and fabric over that. Plus, there appears to be extra material underneath the covering to conceal the grille because it looks different in other spy shots. 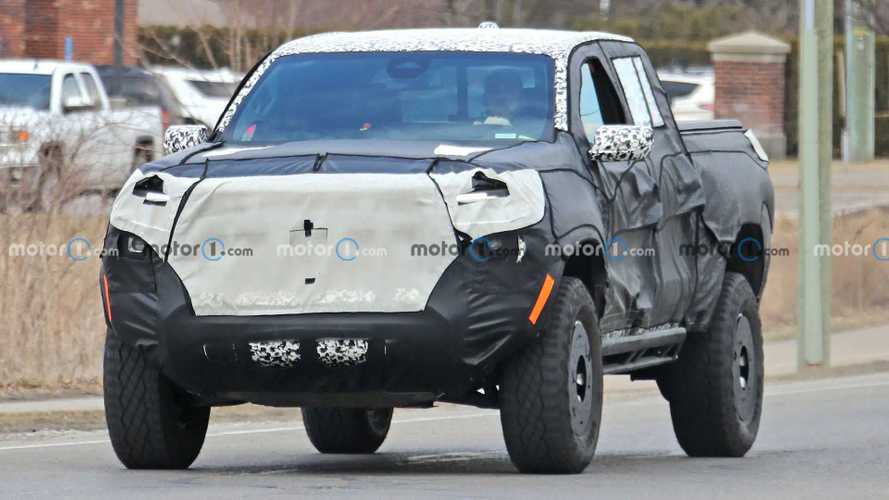 Along the sides, the development team puts covers over the wheels. From these pictures, we can only see that they have a multi-spoke design. The truck rides on Goodyear Wrangler Territory AT tires. Bars along the lower edge of the body appear to double as rock rails and side steps.

It’s hard to tell for sure, but the taillights seem to be production-spec units. The exhaust has a bent pipe that dumps gases behind the passenger side rear wheel.

Compared to the spy shots of the standard Colorado, this ZR2 has a taller ride height. There appears to be a different front bumper that would allow for an improved approach angle.

Judging by the photos, the physical footprint for the new Colorado appears similar to the current generation of the pickup. The styling gets an overhaul, though. The platform is an evolution of the GMT31XX platform that the company naturally calls GTM31XX-2.

Mechanically, the new Colorado ZR2 reportedly comes with a turbocharged 2.7-liter four-cylinder. The version of this mill in the current Silverado makes 310 horsepower (231 kilowatts) and 430 pound-feet (569 Newton-meters), but the tune for the rugged Colorado might be different.

Other mechanical details about the new ZR2 are less clear. It’s possible that the truck continues to use Dynamic Suspension Spool Valve dampers like the existing model.

We are expecting the new Colorado (and its GMC Canyon counterpart) to arrive in the US for the 2023 model year. The ZR2 and Canyon AT4X variants might arrive as 2023 products, too.