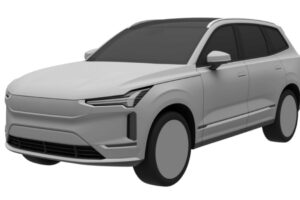 Volvo has confirmed that its all-new, all-electric large SUV will be called EX90 and has also outlined some of the forthcoming machine’s advanced safety technology as part of Volvo’s vision of zero deaths and serious injuries in its new cars. The Volvo EX90 will replace the firm’s current XC90 and will be unveiled on the 9th November this year ahead of sales commencing at some point in 2023.

Our images show what the new machine could look like when it finally breaks cover later this year; these patent drawings were filed with the European Union Intellectual Property Office and show an evolutionary design language for the large SUV.

As per Volvo’s focus on safety, the new EX90 will feature plenty of advanced equipment to protect pedestrians, cyclists and other road users, as well as occupants, and according to Joachim de Verdier, head of Safe Vehicle Automation at Volvo Cars, “We believe the EX90 to be the safest Volvo car to ever hit the road.

“We are fusing our understanding of the outside environment with our more detailed understanding of driver attention. When all our safety systems,sensors, software and computing power come together, they create a preventative shield of safety around you – and you won’t even know it’s there until you need it.”

Systems to be offered on the EX90 as a result include a new LIDAR set-up (light detection and ranging) which uses a scanning laser light to detect objects ahead. Volvo claims the tech can pick up a tyre lying in the road up to 120 metres ahead of the car’s path, for example, while it can pick up pedestrians up to 250 metres down the road.

This detection method works at highway speeds as well as in daylight and at nighttime; unlike a camera-based system light is not required for the LIDAR to work, so the level of protection offered is the same regardless of driving conditions. With LIDAR, Volvo claims accidents with severe outcomes can be reduced by up to 20 per cent, with overall crash avoidance improved by nine per cent.

In the EX90 the LIDAR system is accompanied by five radars, eight cameras and 16 ultrasonic sensors. The latter includes parking sensors, for example, while much of the other tech will still be used for pedestrian detection and lane keep assist, plus convenience features, such as surround-view when parking and semi-autonomous adaptive cruise control.

The EX90 will also be fitted with plenty of interior safety technology, including a driver understanding system that features two cameras trained on the driver to understand their concentration and attention levels.

The tech observes a driver’s eye-gaze patterns, measuring how much time is spent focusing on the road. Volvo believes a driver can actually focus too much on the road ahead and suffer from cognitive distraction, focusing on their thoughts and not the task of driving. Obviously too little attention paid to the road shows that they are visually distracted, potentially by a mobile phone or another device.

Combined with a capacitive steering wheel sensor that knows when the driver is gripping the wheel, the gaze monitoring tech will look to build a bank of driver behaviour data and intervene in a manner of different ways when needed.

This could be by a simple warning that grows in volume depending on the severity of the danger ahead sensed by the system, or the car can even bring itself to a stop by the side of the road and activate the hazard warning lights if no driver action is received.

The EX90’s exterior sensors will be incorporated in a new body, with the patent drawings showing Volvo’s now signature ‘Thor’s hammer’ headlights. The rear bumper and C-shaped light design clearly reference the outgoing XC90 but look sharper and more modern, while the new car’s overall proportions are very similar to the current XC90.

As per the all-electric powertrain offering, the EX90’s grille has been blanked off to reduce drag, with the new car based on Volvo’s new SPA2 platform that features a fully flat floor to house the car’s battery. Specifics on the propulsion system and a target range have not yet been revealed.

It was originally thought that new car could be called ‘Embla’. However, Volvo changed its CEO in March this year, with Briton Jim Rowan taking over. This could have been a key factor behind the brand’s U-turn on the car’s name; Volvo has also trademarked EX60, EX40, ES60, ES90, EV60 and EV90, potentially for all-electric version of its smaller SUVs and its saloon and estate models.

As such, there will be no pure petrol or diesel-powered versions of Volvo’s next big SUV that will rival cars such as the Audi Q7, BMW X5 and Volkswagen Touareg in the large SUV segment. Indeed, by 2025 Volvo is aiming for 50 per cent of its sales to be of fully electric models.

The new EXC90 will introduce a new-generation interior for Volvo. As per the Concept Recharge that previewed this new car, the EX90 will still use a portrait-style central touchscreen, but the panel will be integrated into a much more minimalist environment.

The 15-inch central display will run a new-generation software called VolvoCars.OS, and will sit on a floating style dashboard; the pure electric powertrain and underfloor batteries make a central tunnel unnecessary, opening up further space inside the cabin and boosting practicality in the process.

We’ll see the new EX90 unveiled at the beginning of November this year, but full details on the new car’s powertrain, platform and other advanced technology could be drip-fed by Volvo before the covers come off the new car in autumn..