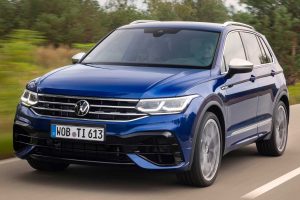 The new Volkswagen Tiguan R is available to order in the UK now. Prices start from £45,915 and, when first deliveries arrive in the UK in spring, it’ll square up to the likes of the Cupra Ateca.

The Tiguan R is powered by the same turbocharged 2.0-litre four-cylinder petrol engine as the Golf R. It produces 316bhp and 420Nm of torque, giving the performance SUV a claimed 0-62mph time of 4.9 seconds and an electronically limited top speed of 155mph.

Like the Golf R, the Tiguan R is only available with four-wheel drive and a seven-speed dual-clutch automatic gearbox. The drivetrain also comes with a torque vectoring system which can automatically adjust the power split between the front and rear axles, as well as each of the SUV’s rear wheels.

Cosmetically, the Tiguan R looks remarkably similar to the Tiguan R-Line, with the only major giveaways being a new quad-exit exhaust system, a slightly larger rear spoiler and some fresh ‘R’ badges. The standard exhaust can also be swapped for an optional Akrapovic titanium system, which Volkswagen says is both lighter and noisier.

Changes to the Tiguan R’s cabin compared with regular models are a little more noticeable, as the car features the same blue-on-black upholstery as the Golf R. There’s also a sports steering wheel, which features extended paddle shifters and a new R’ button, which allows drivers to quickly switch between the SUV’s drive modes.