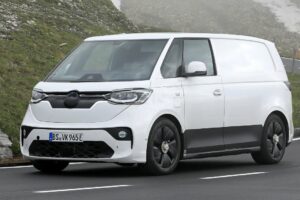 The retro-styled Volkswagen ID. Buzz electric microbus has been spotted in pre-production form, ahead of its release next year.

Volkswagen is readying it’s Type 2-inspired ID. Buzz microbus for release in 2022 and our spy photographers have snapped this development mule testing in the Austrian Alps.

It’s difficult to make out from the heavy disguise of this test car, but the ID. Buzz carries forward the retro design language first seen on the ID. Buzz concept from 2017. It takes cues from the Type 2 Microbus of the 1950s, with a deep windscreen, rounded surfacing and classic two-tone colour options likely to feature.

The version spotted here looks to be the ID. Buzz Cargo, which loses the second and third rows of seats for maximum carrying capacity. There will also be a passenger van available, and both models are expected to use batteries ranging from 48 kWh to 111 kWh, for a range of up to 340 miles or so. In the single-motor variant, 201bhp will be sent to the rear wheels alone, giving a limited top speed of 99mph – just like in the ID.3 and ID.4. However, a four wheel drive, dual-motor model is expected too, with a punchy 295bhp.

The ID. Buzz is set to be packed with cutting edge tech, including a Level 4 autonomous driving system. The German firm has partnered with the American technology company, Argo AI, with the aim of putting its self-driving electric van on the road by 2025.

A Level 4 autonomous driving system would hardly need any supervision from the driver, as it should be able to respond to incidents on its own. However, Volkswagen acknowledges that the technology still has a long way to go before it’s 100 percent reliable, so it only plans to make the system available in certain cities at the ID. Buzz’s launch.

Volkswagen and Argo AI have already established a test facility at Munich airport, with the pair planning to start the first trials on European roads later this year. Every development mule will be equipped with an arsenal of cameras and radar sensors, as well as Argo AI’s newly developed lidar sensor, which will allow the test vehicles to detect objects up to 400 metres away.

The announcement also provides us with another teaser image for the ID. Buzz, whose  and styling doesn’t appear to have changed since the last time we saw it. It features the same retro design language, inspired by the Type 2 Microbus of the 1950s, albeit with a new dome in the roof, which we assume houses the lidar sensor.

Speaking at the 2017 Geneva Motor Show, Volkswagen’s design boss Oliver Stefani told Auto Express: “We would like to bring [the Microbus] back because it fits so well to what the brand stands for: it’s emotional, it has functionality, it makes your life easier.”

“With the MEB platform this is the chance now to get the proportions back,” he added, referring to the fact that you don’t need to have an engine in the front with an EV. “But you can also get much more interior space, almost one class higher.”

Volkswagen describes the ID. Buzz as a vehicle which “transfers a Microbus feeling into the future.” It draws design inspiration from the iconic Type 2 van, but the space-age interior, enormous 22-inch alloy wheels and wraparound LED headlamps modernise the design.

Its styling certainly fits with the rest of Volkswagen’s ID. range – and, like its siblings, it’ll be based on the company’s dedicated MEB electric underpinnings. The chassis will be stretched out to van-sized proportions, giving a 3.3-metre long wheelbase and short overhangs, but the electric motors and battery packs should be carried over.

The wheel-at-each-corner design gives the ID. Buzz space for a flexible eight-seat cabin, with multi-adjustable rear chairs and a driver’s seat that swivels 180 degrees. The latter action happens automatically when the autonomous ID. Pilot mode is selected, retracting the single-piece capacitive touch steering wheel while the car takes full control of the driving.

Other tech includes an augmented reality head-up display and a removable portrait tablet that controls the car’s functions.

Just as in the concept, the batteries will act as a structural member in the floor of the production version, lowering the vehicle’s centre of gravity. Rear air suspension and adaptive dampers aim to deliver high levels of comfort, while a 10-metre turning circle is promised, thanks to rear-wheel steering.

Although not officially confirmed, the ID. Buzz is also expected to act as the autonomous flagship for Volkswagen’s new Uber rival, MOIA. The ride-hailing company was established in 2018 and plans to steadily expand its operations over the next five years, becoming the first brand to use the self-driving van in 2025.

Robert Henrich, CEO of MOIA, said: “MOIA has extensive experience in the field of mobility services and fleet management. Within a very short time, we have set up Europe's largest, all-electricall- electric ridepooling service and provided mobility to millions of passengers. We bring this expertise to the cooperation with Volkswagen Commercial Vehicles and Argo AI. Hamburg will be the first city to offer an autonomous ridepooling service with an ID. Buzz.”

Now read all the latest news on the upcoming Volkswagen ID.5 coupe-SUV…