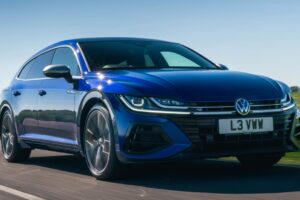 Does the new Volkswagen Arteon R Shooting Brake have the performance to match its looks? We find out…