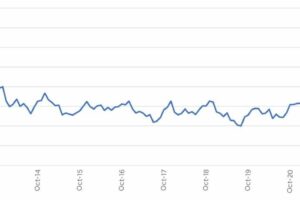 The affordability index from Cox/Moody's hit another peak, with monthly payments averaging a record $748, and the average new vehicle price reaching $48,281.

The average price paid for a new-vehicle in October increased by 0.2% to $48,281, according to Kelley Blue Book, while the average interest rate increased another 30 basis points. That resulted in the estimated typical monthly payment increasing by 1.1% to $748, a new record high. Supporting affordability, median income grew 0.4%, and incentives from manufacturers increased, but all  other factors moved against affordability.

The number of median weeks of income needed to purchase the average new vehicle in October increased to 42.8 weeks from an upwardly revised 42.6 weeks in September.

“Higher rates are already shifting access to vehicles and financing towards wealthier consumers,” said Cox Automotive Chief Economist Jonathan Smoke, in a news release. “Affordability will be challenged for years to come in both the new and used markets. It’s not the Fed’s fault, but it will impact consumer access to transportation.”

New-vehicle affordability in October was much worse than a year ago when prices were lower, incentives were higher, and interest rates were much lower. The estimated number of weeks of median income needed to purchase the average new vehicle in October was up 7% from last year when the index stood at 40 weeks.