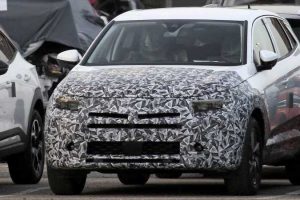 The updated Vauxhall Grandland will follow in the same vein as the facelifted Crossland, with styling inspired by the Mokka

Vauxhall will soon launch an updated version of the Grandland. The new SUV will go on sale this September sporting a handful of cosmetic and mechanical tweaks, which should make the car a fresher looking rival for the Nissan Qashqai.

The updated Vauxhall Grandland will follow the same path as the facelifted Crossland, dropping the ‘X’ from its nameplate and adopting a range of styling cues from the Mokka. At the front, there’ll be a pair of new headlamps and a more angular front bumper, with a larger air intake lower down.

Vauxhall will also carry across its ‘Visor’ styling language for the new Grandland, swapping the old car’s radiator grille for the same blanked-off gloss black unit found on the Mokka. Large triangular vents, like those used on the updated Crossland, should also appear beneath the SUV’s headlamps.

Our spy shots only show the front of this Grandland prototype, but we can make an educated guess about Vauxhall’s revisions for the car’s rear. Updates should be similar to the Crossland, with the SUV’s solid black plastic bumper being swapped for a new item with a larger silver skid plate. Fresh tail lights and a tweaked tailgate design are also expected.

Inside, changes will be minimal, stretching to a handful of trim updates. The old car’s eight-inch infotainment system should be carried forward, supported by some fresh safety equipment, including a pedestrian recognition system lifted from the Crossland.

Buyers will also be able to choose between two plug-in hybrid powertrains, both based around the same 1.6-litre four-cylinder petrol engine. The cheaper front-wheel drive model will have a combined output of 222bhp, while the more expensive four-wheel drive variant will produce 296bhp. Both will also offer claimed fuel economy figures of around 200mpg.

Now read all the latest news on the pure-electric Vauxhall Combo-e. Let us know your thoughts in the comments below…