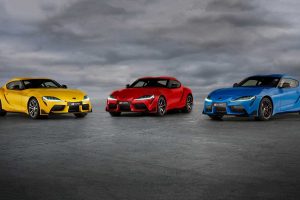 Toyota has unveiled a new special edition version of the GR Supra, but only 30 examples will reach the UK

This is the Toyota GR Supra Jarama Racetrack Edition. It’s a limited edition version of the Japanese brand’s flagship sports car, which is named after the Spanish racetrack where the model was first unveiled to the European media back in 2019.

Prices for the special edition GR Supra Jarama Racetrack are yet to be confirmed, although Toyota has said that just 30 examples will make it to the UK.

It’s the same story inside, with heated sports seats trimmed in black Alcantara with blue stitching and a carbon fibre insert for the dashboard, which features an outline of the Jarama circuit and the specific build number of the car.

The Supra Jarama Racetrack Edition is powered by the same 3.0-litre straight-six turbo engine as the standard Supra 3.0. It generates 335bhp and 500Nm of torque, which Toyota says is enough for a 0-62 mph time of 4.3 seconds. Power is sent to the rear wheels via an eight-speed automatic gearbox.